This is a follow-up on my post of June last year. If you want you can take a look back and see the improvements!

I had another one in between in Octobre, but that was a disaster because of the strong wind that day. The silk cover sheets I finally found were too light and together with a lot of my smaller items like the flower brooches were blown from the table! Even after pinning everything down on the wood I couldn't walk away for a second.

Last month I had two Christmas fairs in my home town, Amsterdam. I don't know if it was the Christmas spirit or the different attitide of the big city folks, but for the first time in my craft fair history I sold at a profit. Maybe it was a bit of both, but nine out of ten people were clearly buying for themselves.

One thing that may have helped a little bit too was a better set-up of my table. Because both markets were very close to home I could carry all my stuff by bicycle in two hauls and so I could take more and better display stuff. 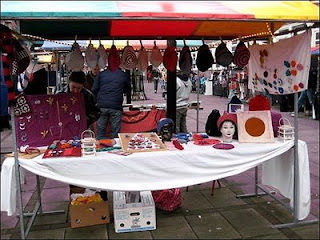 First of all I had a really good cover sheet. This one is in one piece and not too heavy, but not too light as well. When I went through my boxes I found a white curtain that measures about 4 by 1,5 meters, the perfect size for a market booth, though the stalls were a bit shorter than the usual 4 meters on this market. I had even forgotten I had it and I also can't remember when and where I found it. And though it's a bit bulky and heavy to carry, I think I may keep this one and even drag it with me in the train for a future market out of town. 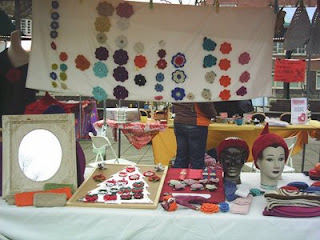 With a neatly hemmed piece of finer cloth from a trashed pull up curtain I made a wind proof display for my flower brooches. Can you see it flapping in the wind? And that was only half the wind force as in Octobre. Only the second day I hung it to the side (first picture) as it was blocking my view of my visitors' faces a bit. It's also very handy for transportation and setting up, as I just keep the brooches pinned on and roll it up. It saves a lot of packing and unpacking, so this one is also a keeper too, even for markets out of town.

In June I showed the display board that I made to fit exactly in my suitcase. This time I had to lay it almost flat on the table because it was to light to stand up in the breeze. If you look close you can see it in the photos before the above paragraph. 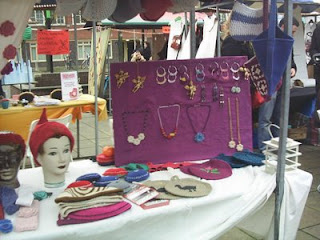 But I still had one of the same boards in its original size and covered it in a pretty trashed piece of silk fabric (same I used in Octobre for my table). Unfortunately it's too large to bring with me out of town, but here I think it really helped to draw attention to my crocheted jewelry and dressed earrings. 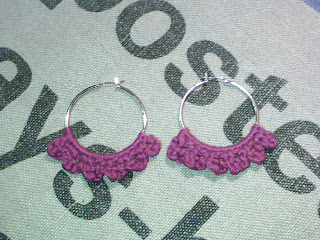 I sold three pairs of them.

For one time I didn't have to bring that ugly plastic make-up mirror (again, see June) and took a pretty one that normally hangs in my kitchen. The mirror leans against a cardboard box that I used for transportation and covered in the same purple silk as the display board and serves as a rise for my tea cozies on the table. 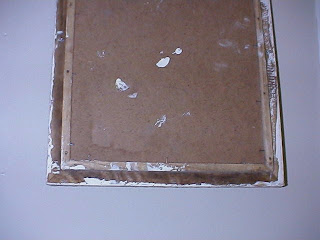 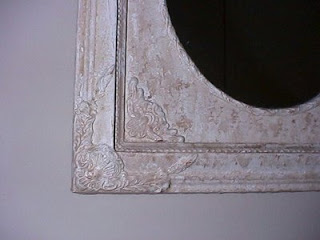 When I first saw it on the curb I thought it was cheap kitsch, but I like a bit of fun kitsch anyway, then at home, looking at the back I found it was actually a handmade item, and who knows how old! 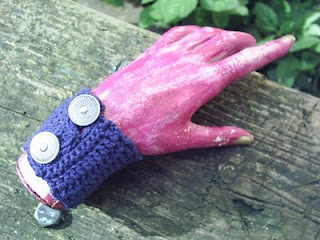 Here's that display hand I talked about in 'A Dress Dummy'. Even not yet repainted it helped to draw attention to my crocheted wrist bands and I sold almost all my broader models, including the orange rag cuff I showed in my previous post and this dark blue one. And just like this red one below, it's completely made of discarded clothing, including the buttons. 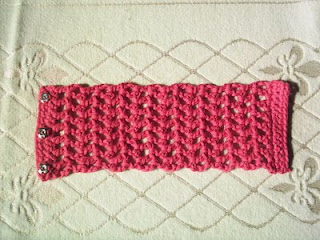 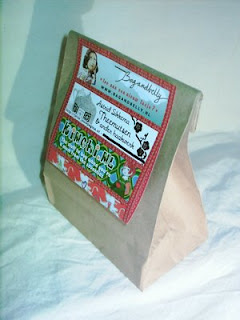 Perhaps you thought my post about the rescued lunch bags was a bit funny. But here's how I used them to pack up the products for my customers. 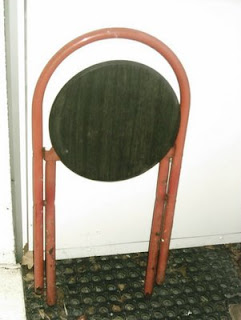 Last but not least: carefully tied on top of a box I even managed to bring a small fold-up stool. I found this one in a dumpster near a renovation site. Too bad I forgot to take a picture of my loaded bike...
Posted by Le-Chat at Sunday, January 18, 2009 4 comments: