The Turtle And The Bathtub 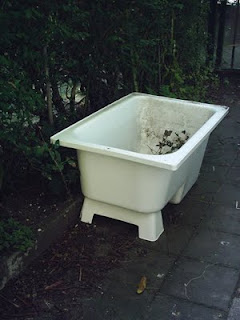 A few weeks ago when I came home from grocery errands I found this old plastic hip bath which we dragged home earlier this year parked on our garden path where before I left it was still in a corner of the yard. One of those silly curb finds but the plan was to wash my large duvet in it (too large for my machine) and then get rid of it again, but I'm not sure if this will still happen this summer. 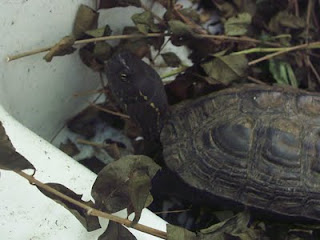 A look inside made clear immediately what had happened. The BF had found a turtle in the park, decided it didn't belong there (turtles don't naturally live in the wild in Holland) and brought it home. The tub turned out to be a perfect place to keep it in with a bit of water in the lower part and leaves and branches on the higher side.
With the BF back in the park I started Googling but couldn't find out which kind of turtle I had here. An email to the official turtle rescue centre only gave me an automated answer ('these animals don't belong here, please call your local animal rescue centre') so I decided there was nothing left to do but call the pet paramedics. Where quite disapointingly the telephone operator told me next time to leave the animal where I found it! Oh? She sent out the team anyway because now that I had him I wasn't allowed to bring turtie back to the park.
Well, Googling more I found out this: the most commonly kept pet turtle in Holland is the Red-eared Slider (see picture below). Therefore often dumped it turns out they do manage to get by in the wild and in parks, but our winters are generally too cold for them too procreate (maybe better so). However once every so many years when we have a really harsh winter they all die for sure. 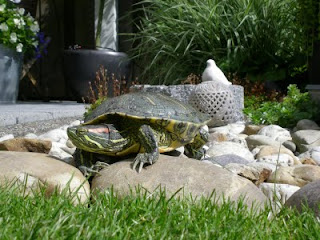 Then again I don't believe what we found was a Red-eared Slider. With that pitch black head and the dotted yellow line he doesn't fit the picture. Best thing was just to wait for the rescue team. Unfortunately when they finally came they also classified him as a Red-eared Slider. I'm still not convinced. The good thing though is they were a lot more happy about our rescue than their co-worker in the office and found his temporary home in the tub quite an ingenious idea.
Now I can only hope they brought him to the right place where he was properly recognized and gets the right treatment. But if anyone recognizes our turtie I'd be happy to hear from you. Sorry the pic was a quick snapshot and not very clear, please click on in to enlarge.
Posted by Le-Chat at Monday, August 31, 2009 7 comments:

All zippers I use in my craft projects come from thrown out clothing and bags. I must have said that before. This doesn't mean they have to look old or used. 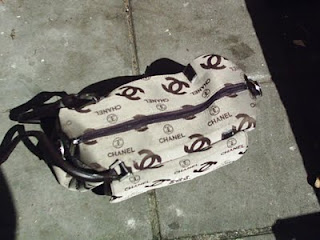 Here's another bag I just recently found. The handles were broken off in two places before the woven material of the bag even had the chance to become a little bit smudgy. 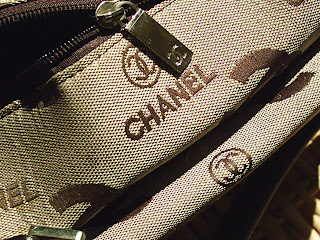 Love those pullers. On the back side of them 'CHANEL' is imprinted in full. The inside pocket has a finer zipper in beige with a smaller puller in the same style. They will all end up in crocheted bags or pouches.

First I wondered why such a great brand would produce such a poor quality bag (even though it's all manmade material), but at closer look the cuts look too sharp to have come about from wear and tear. I think one mommy's little boy or girl has been playing with a pair of scissors. Hope she came over the shock.
Posted by Le-Chat at Tuesday, August 11, 2009 6 comments: