Though I still don’t go out far to look for stuff since a couple of months I don’t fail to pass by whenever I can a special spot across from the end of my street. 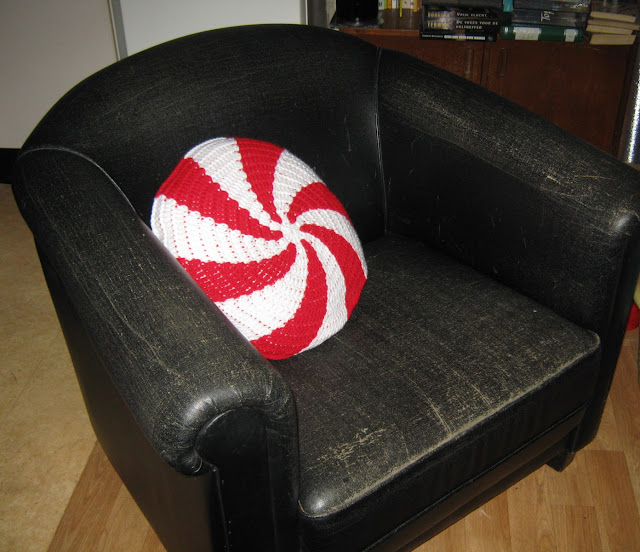 In the past it has produced my easy chair that I still love. 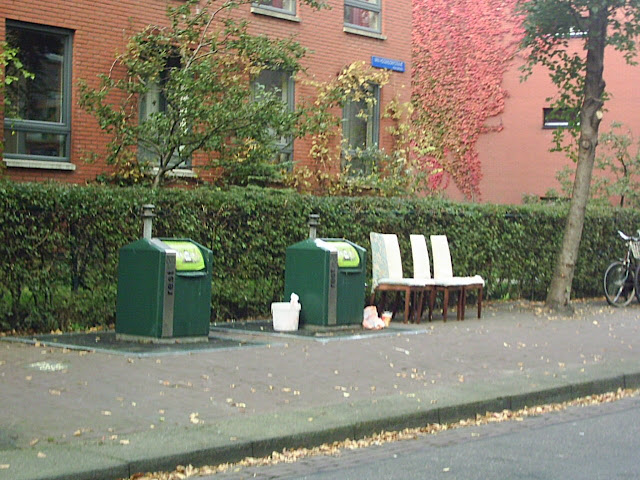 This is a very old photo and now there is a large plastic collection bin next to the tree which somehow invites people to dump bulk trash next to it any day of the week as the items will be kind of hidden between it and the underground kitchen waste bins. 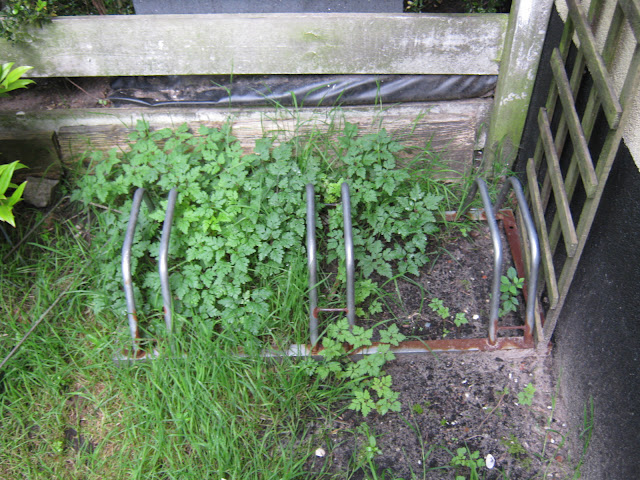 More recently I spotted this bicycle rack that is now in my back yard serving its purpose. Very handy, especially since my bike does not have a kick stand. 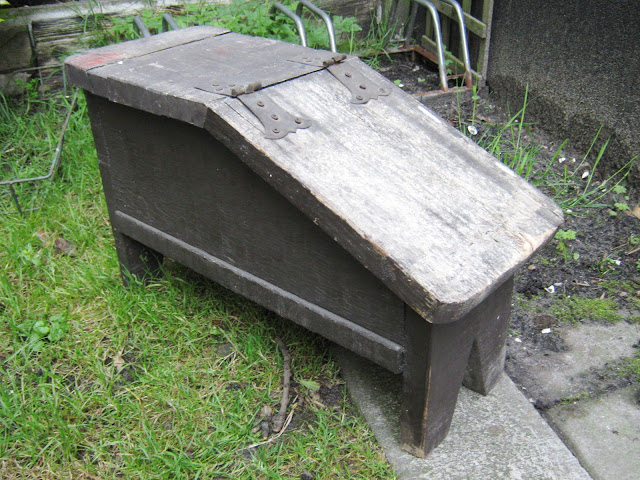 But next to it I saw a strangely shaped wooden box. At closer look it turned out to be a primitive handmade shoe shiner’s bench. Most likely from North Africa, as the people often travel by road and boat to bring goods back and forth.


Lucky I was on foot and it was easy to carry the two things home at once. 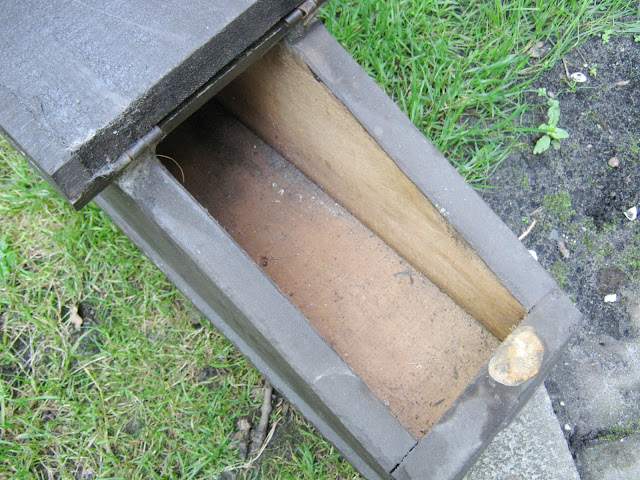 I was pretty excited about the thing but it has failed to sell yet. I’m not surprised nobody is looking for a shoe shiner’s bench, but it would make a great decorative storage chest in a shabby chic interior. Therefore I listed it in such a category and also put that in the description hoping someone may just get the idea hitting on it by accident. Or does anyone have a better suggestion? 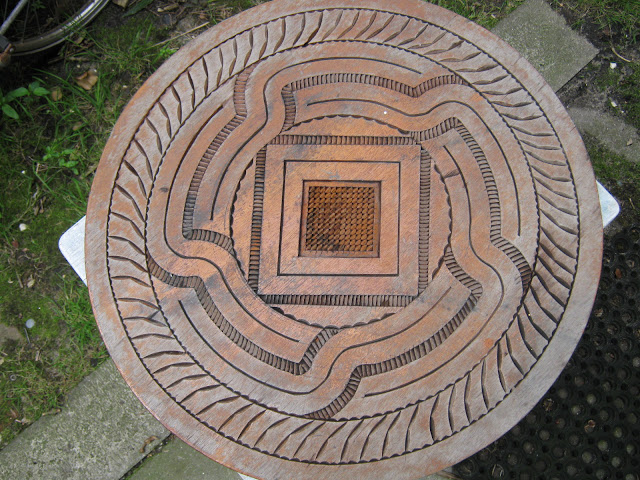 More success with this hand carved table top from about a month ago. Passing by with my bike loaded with groceries I managed to lay it flat on the back carrier and walked the last meters home. I had a buyer within a week and got a very nice amount for it.
Posted by Le-Chat at Wednesday, September 30, 2015 No comments: 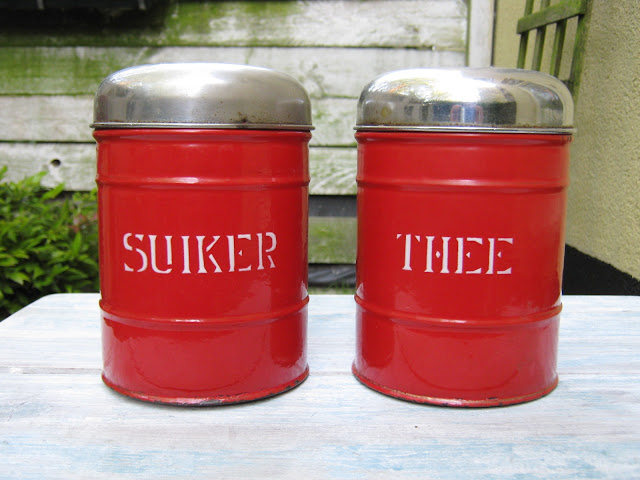 Here’s another find from my neighbour. They are almost really antique, but at the time complete sets in different sizes were found in every kitchen and looking on the local on line market place I found lots of them and they don’t cost much. The only thing is most are dark green and my bright red is a bit harder to find. But I’m not ready to sell these yet at what the market wants to pay for it. 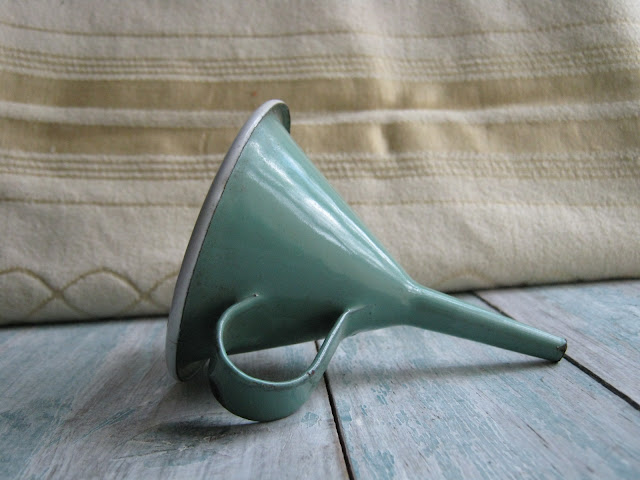 Same counts for my little pale green funnel, which I actually bought for 20 cents euro at a fund raiser flea market.  I saw one for five euros and thought I’m not letting mine go for that. 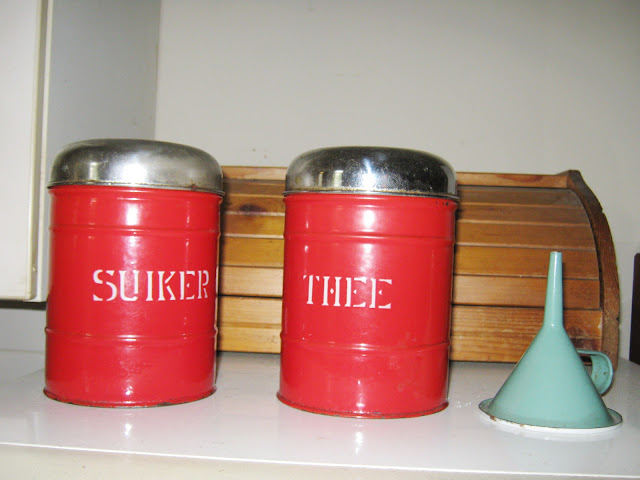 I’m happy to have the jars and funnel on top of my fridge where they bring a little colour in a dull white corner.
Posted by Le-Chat at Monday, September 28, 2015 No comments:

Email ThisBlogThis!Share to TwitterShare to FacebookShare to Pinterest
Labels: Decorating, From My Friends, Kitchen and Cooking, Thrift Finds

Talking about my trash picking neighbour last week I looked up some more of his gifts. Well these could have sure ended in the hands of the iron collectors who sell it for its weight, if he hadn’t rescued them. 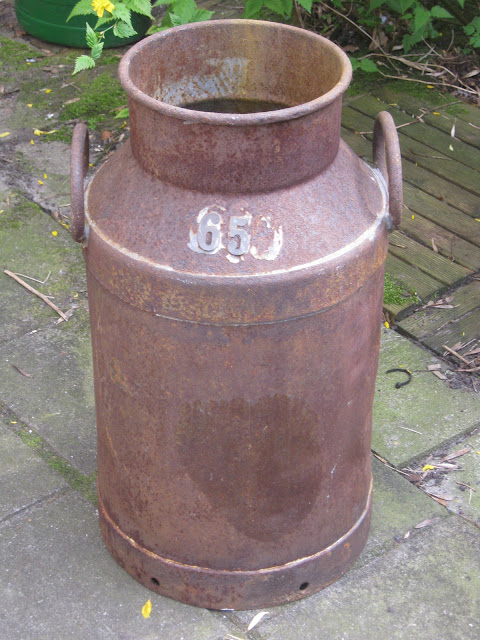 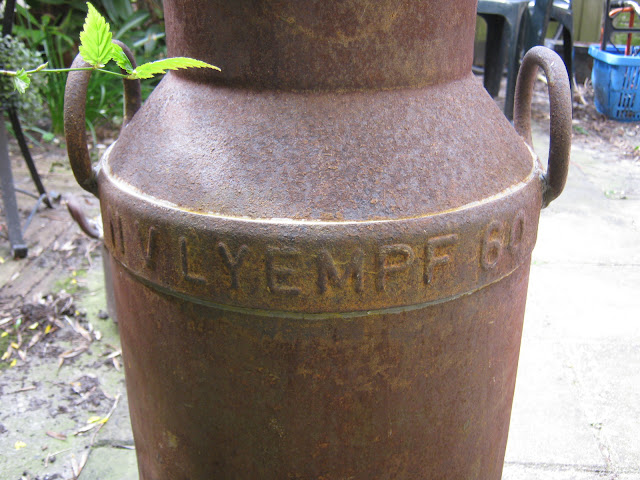 It was a really pleasant surprise when I found this milk can in my front porch. If I had place I would have kept it. They make great vases for giant dry flower arrangements. Not surprisingly it sold quickly for a very nice price, even without the lid! 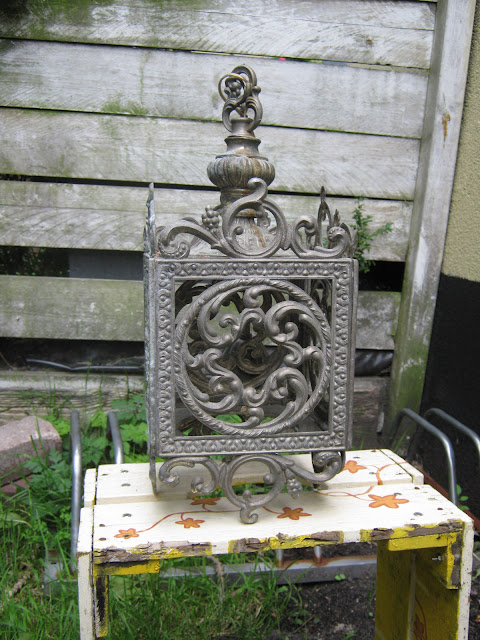 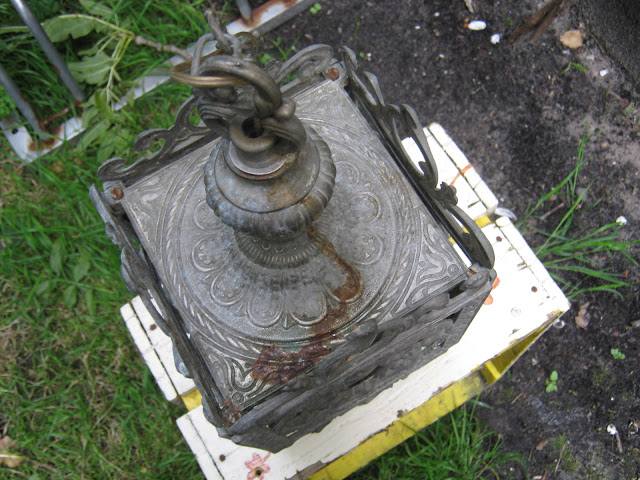 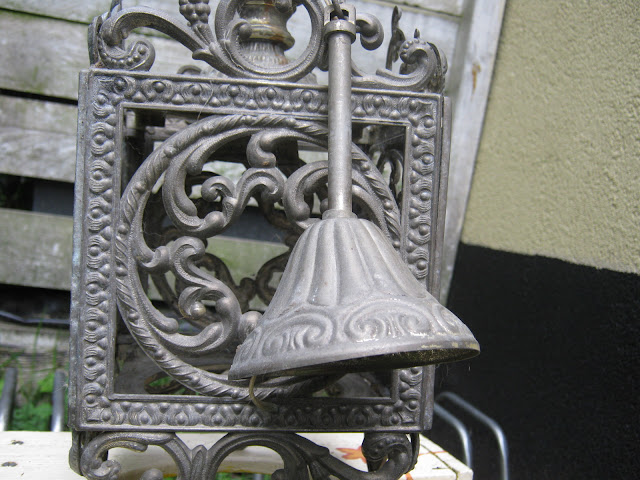 I also would have loved to keep this rusty old lamp. However I didn’t trust the strength of my prefab modern ceiling so finally last July I listed it. Usually items like this sell within two weeks, but as it didn’t I took it to the car boot sale in August. There I let it go at half price, but I was glad because it helped me make my day’s target and I didn’t have to drag the heavy thing home.
Posted by Le-Chat at Sunday, September 27, 2015 No comments:

I’ve been following the big Ebay sellers blogs and they all complain about the slow season. Now I can’t compare because it’s since early August I started listing like crazy and it paid off, multiplying my usual peanuts revenue by five. September started off more or less the same, until a few days ago things seemed to have come to a halt. Then I had technical problems with Etsy, not being able to list anything…

I had started to write off my frustration here when emails and bids started to come in again and I sold two pairs of shoes and my xxxth set of chairs. I got so busy I had to leave the blog. 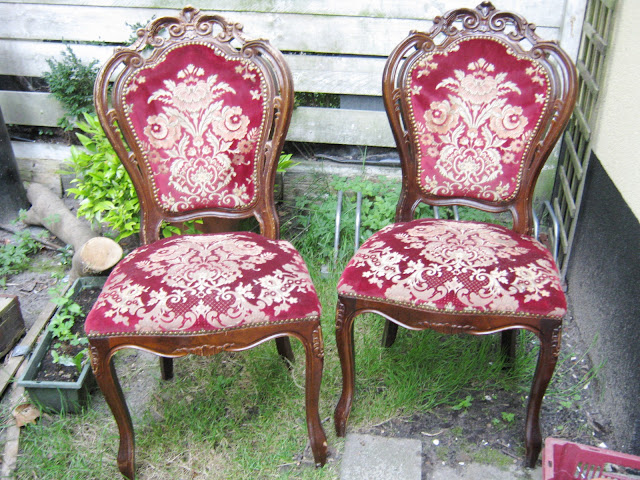 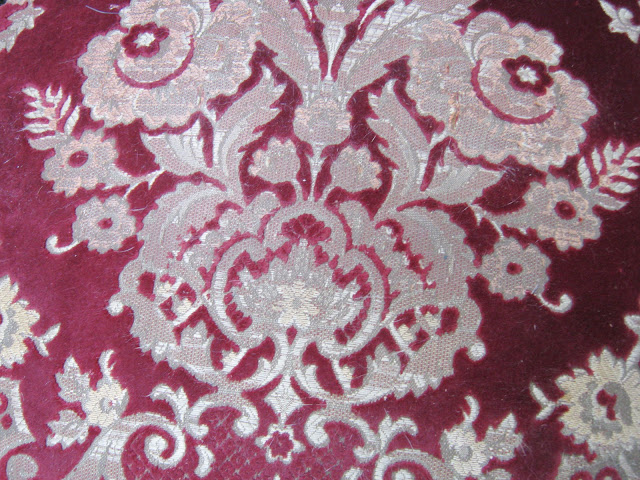 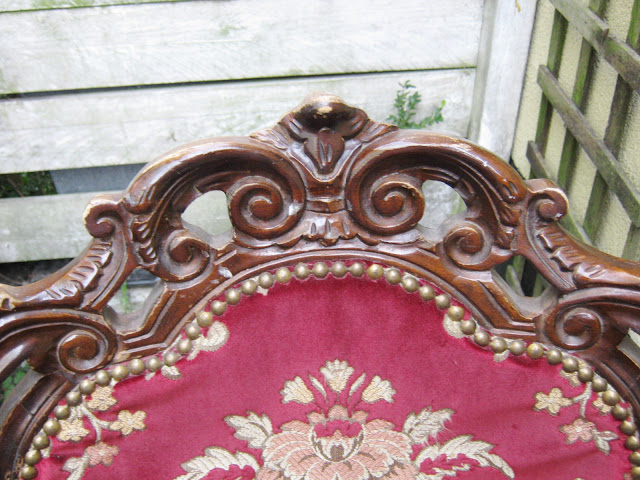 The morning after I dragged these in I regretted my enthusiasm a bit seeing the pretty bad state they were in. On top of the worn out upholstery one was a bit wobbly too. But the woodwork was still so lovely I hoped to find a new owner anyway, albeit at any price. Oh, hadn’t I promised myself not to bring in any more chairs? To my surprise they went after only five weeks.

Also to my surprise it was a to lady who said she loves DIY and things that look old and she bid three times the minimum I had in mind.  With that I’ve come to a daily average that’s even a bit above the one of August. It’s far from an income, but it does give hope. And Etsy was fine again this morning. 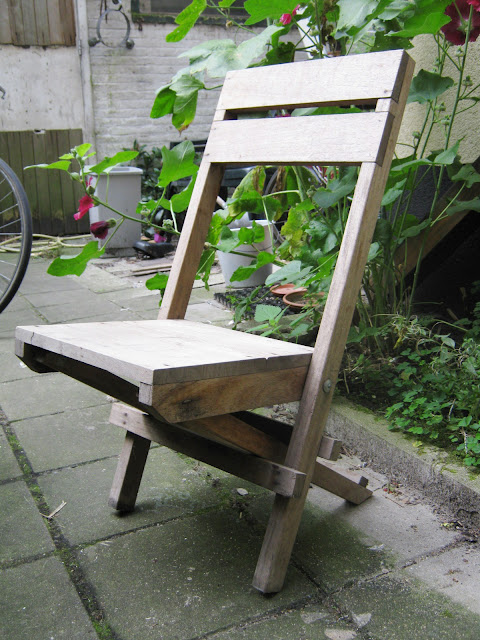 Talking chairs again I found an old one that didn’t make it to the blog yet. The fold up sort of fisherman’s stool was delivered to me by my trash picking neighbor. I listed it first in Fall 2012, my first active selling year but it had to wait till May 2013 to find a buyer. I had to look that up but I do remember it was a design student who bought the funny thing to study its construction.
Posted by Le-Chat at Friday, September 18, 2015 No comments:

Email ThisBlogThis!Share to TwitterShare to FacebookShare to Pinterest
Labels: Chairs, Etsy, From My Friends, Selling Trash

I hardly ever buy to resell but here’s one exception. 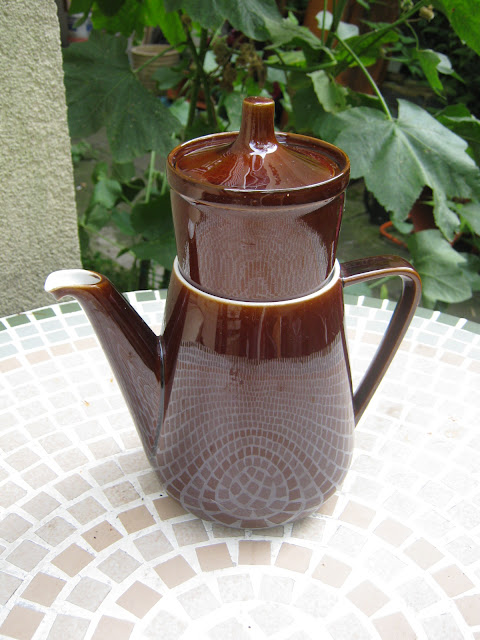 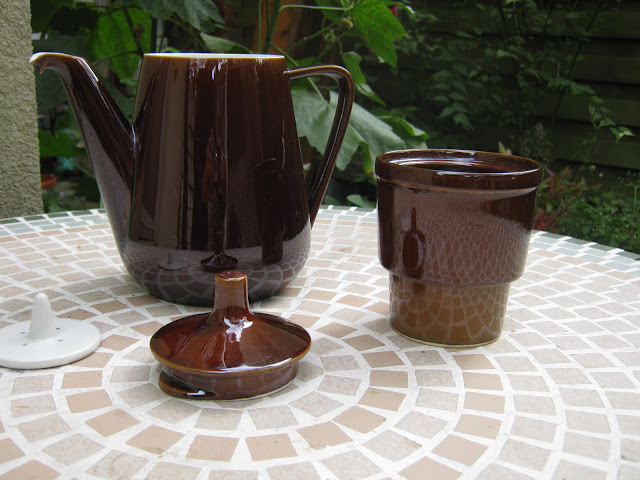 I actually went to look for a teapot to design a cozy around, but all they had was an ugly thing priced 11 euro’s. Then to my surprise I saw the Villeroy & Boch coffeepot for only 2,50! Remembering we had the same shape pots when I was a little girl in the Sixties for tea and coffee in pale yellow and blue I couldn’t leave it. I’m not sure if mom had the filter top but possibly it remained in a cupboard - it was clumsy because you had to use a round piece of cotton cloth in it - after the handy paper filter bags with the plastic holders appeared.

Out of nostalgia I kept the set as a piece of décor for a long time. But in the end it got in my way so I listed it. To my disappointment the same brown Seventies pot was all over the place with the one exception that nobody else had the filter part. If only mine would have been one in those Sixties colours it would have been worth a lot more.

Still I managed to make a profit of nearly 10 euro’s. An elderly lady had broken her pot that she had used all her life and sent out her daughter to find the same model to replace it. For a not so collectible item I think it was the best I could do. 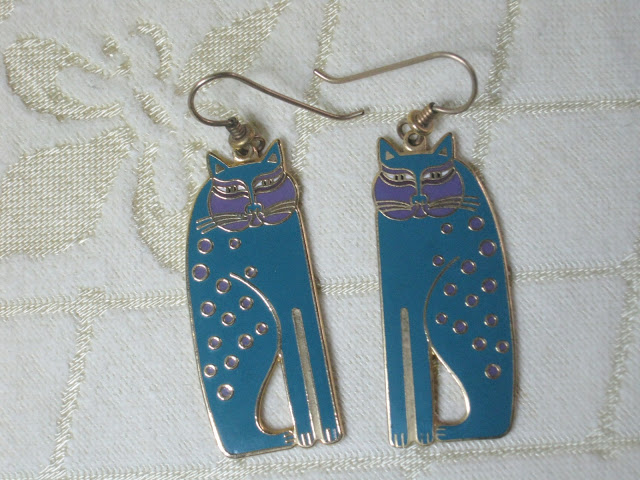 I did better on a pair of Laurel Burch earrings that my friend bought at 1 euro.  After finding out the designer is not among us anymore and her work is very sought after she gave them to me to list on Etsy. I did some research of my own first and found the cat earrings were doing around $35 on Ebay, but the exact same pair called ‘Siamese Cats’ was listed $50 on Etsy. So I put them up for $45.

Well, can you guess? Sold within eight hours! After taking off costs there was a bit over 30 euro’s left which my friend kindly split with me.
Posted by Le-Chat at Monday, September 14, 2015 No comments: