If you buy a small fir tree in a pot,  you can easily keep it outdoors through the year and use it again the next and possibly even a third Christmas.  Especially if you plant it over in a larger pot with fresh compost. But due to the initial root damage - even if planted over in full ground - they eventually have a limited life. 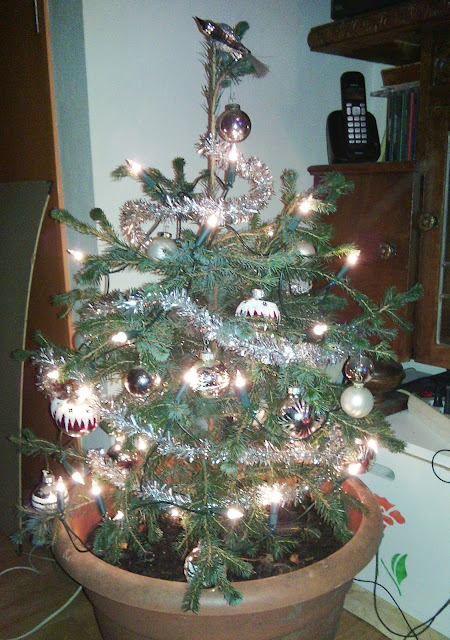 This is my little tree - that I found after Christmas in 2013 - in 2014. Unfortunately at repotting the Man cut off the lower branches a bit too rigorously, which didn’t help to keep its shape. But still I had a real live tree for free.

It’s now still alive, but during summer it lost a lot of needles on the inside. Dunging helped growing new branches so it still looks ok from a distance, but I haven’t put it in yet. Will decide after writing this post. 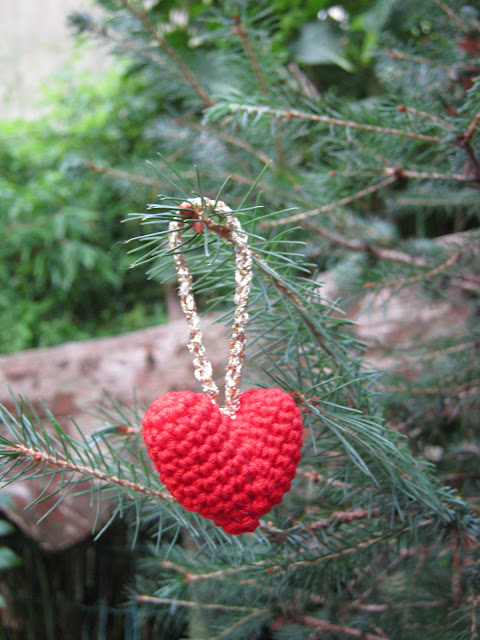 It was perfect for photographing my crochet decorations though.

I hope to find a new little firm one this year, then I will plant the old one somewhere to give it as many more years as possible.

Merry Christmas all!
Posted by Le-Chat at Thursday, December 24, 2015 2 comments: 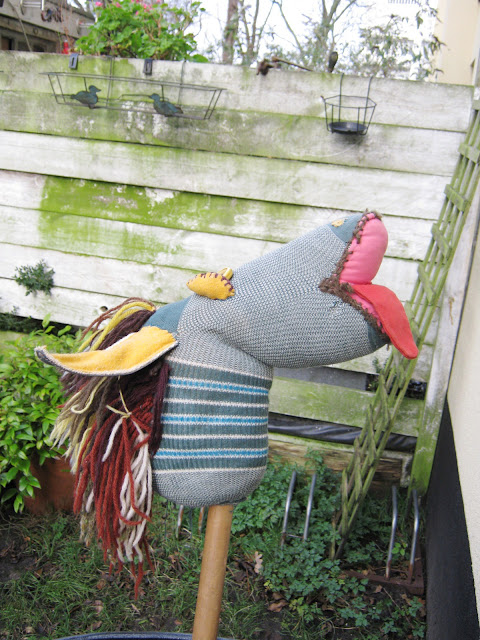 I knew sock monkeys but I had never seen a sock horse on a stick! Though he’s not very pretty somehow I think he has a cute face, and when I looked for them on the web I found several tutorials, but none for a laughing horse. Actually I just love him because he's so ugly and almost totally hilarious, and made of a really old used sock! I don’t think there is much chance of selling my horsie, but I thank the Man for rescuing it and bringing it home and so I decided to show some detailed photo’s here so you can see how it’s made and then I’ll share the links I found for further help. I'm sure if copied in nicer colours and carefully made it will look fantastic. 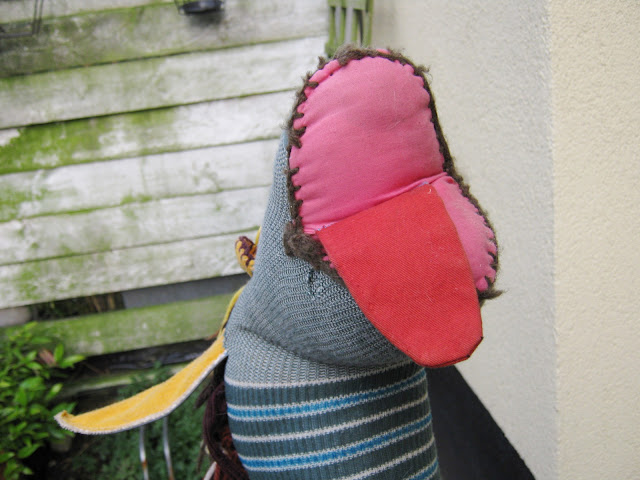 Obviously the mouth is a sideways cut in the toe of the sock, then filled with woven fabric. I think you have to fold the oval shape, then sew in the tongue under the fold before you stitch it in the sock. 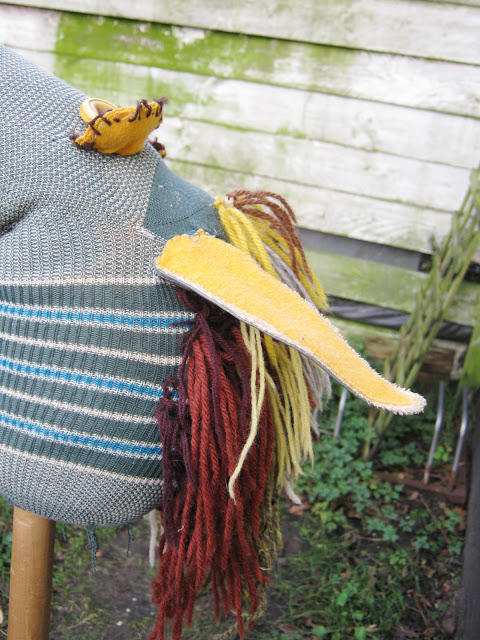 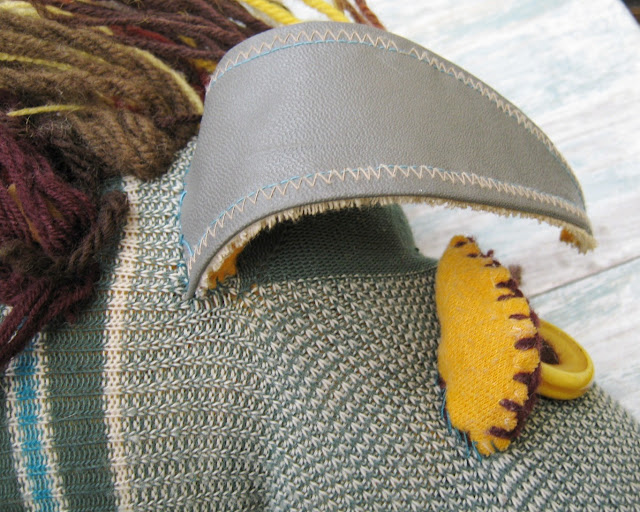 His long ears are a double layer of cloth in front and imitation leather at the back. 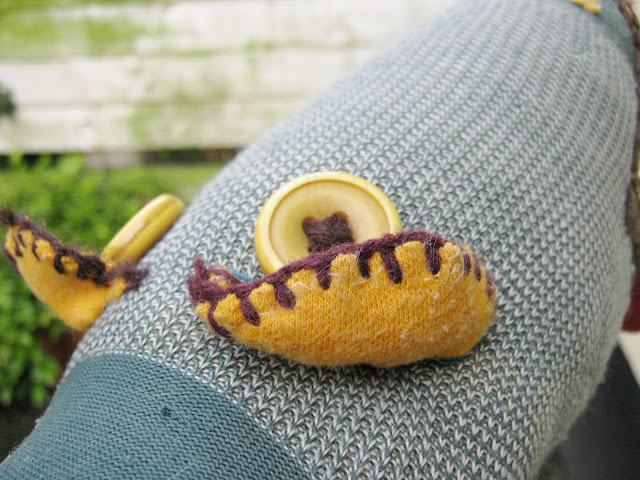 And don’t you love his eyes? Big buttons and half circles of fabric sewed on in a curve for the lids. 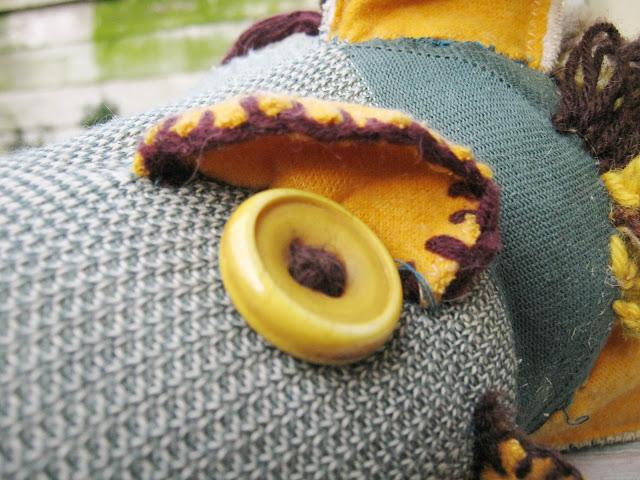 Here’s one more from the front angle.

Have a look at Chickabugs blog for a very easy to make version.

The CountryChic Cottage has an equally simple one but with a bit more details.

I'm only a bit sad it looks like they used new socks... Not my kind of upcycling.

Apart from that finally one by Madmin that does have an open mouth, but it's a fabric cut pattern, yet it may help you to put it in.

Oh, and please remember, if you don’t have any poly fill at hand look if you have used up pillow inserts or plush toys beyond cleaning or repair. Their insides can be washed and reused! 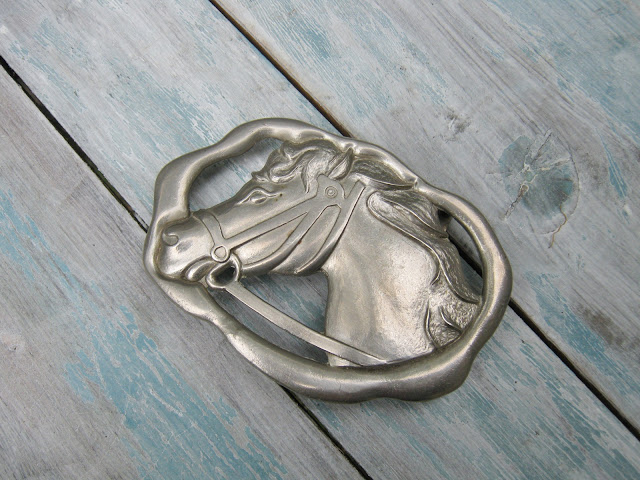 This is a horse head belt buckle my friend picked up in her part of town. I listed it on Etsy but it just expired. I really thought it would go, though there are many horse belt buckles on offer I didn’t see any this shape. 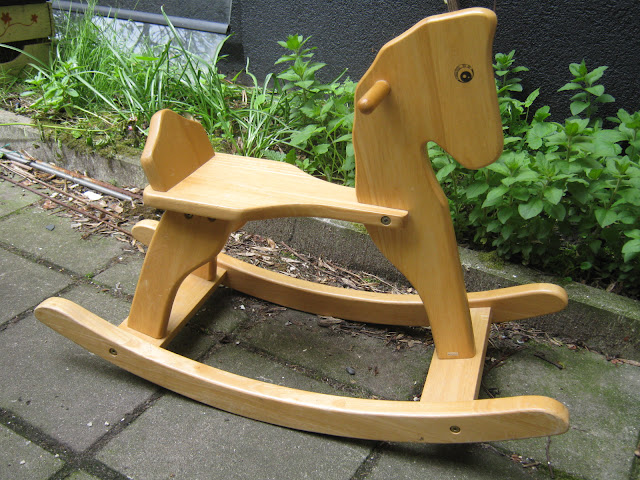 Last summer when she came by my place, at the door my friend pointed out there was something that might be interesting at the dump across the street. Indeed it was a neatly unscrewed rocking horse, the parts tied together and the screws stuck on in a plastic bag.

In broad daylight on a non-trash day it obviously wanted to be found!

I listed it but it didn’t go. At least not in the short time before the last two car boot sales we had in August. I sold it at the second one under my price, but I was glad it went that quickly to a new child.
Posted by Le-Chat at Monday, December 14, 2015 3 comments: 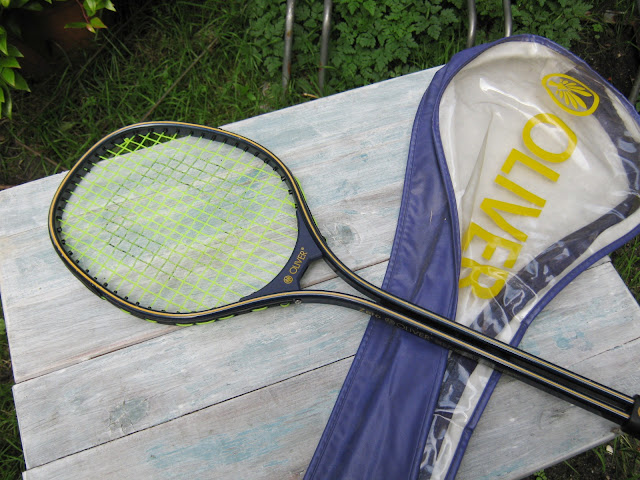 I wasn’t too thrilled when I saw this squash racket sticking out of a box across the street. I’ve sold old tennis rackets of iffy quality on markets but with difficulty, I ended up donating one remaining to the free pick-up center and I gave away another squash racket to a kid. 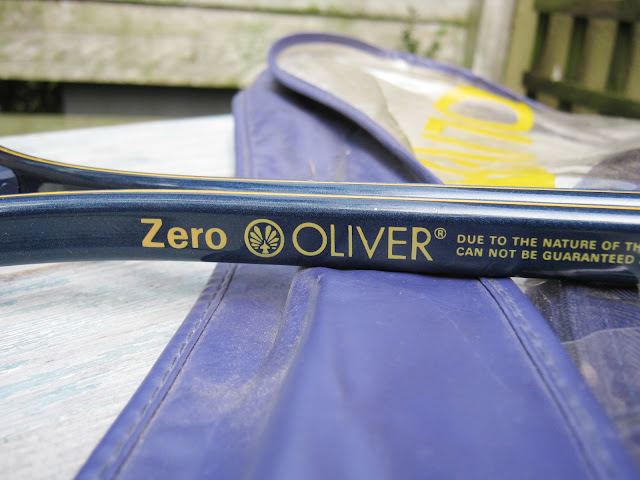 But this one looked good enough to go on line and having the protecting case was a plus. 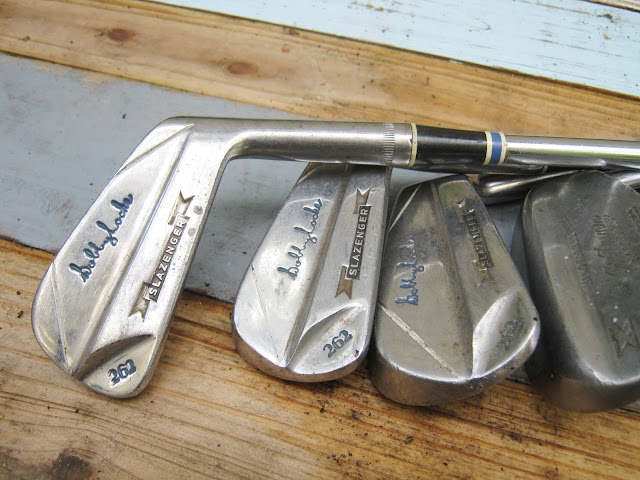 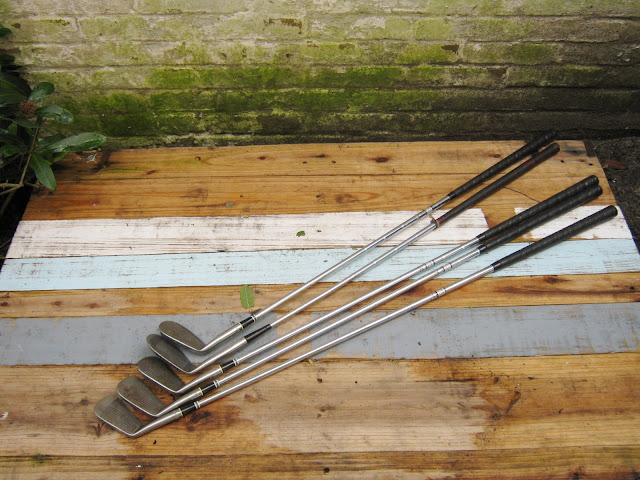 After all last year I sold these old golf clubs to a student, so it was worth trying. 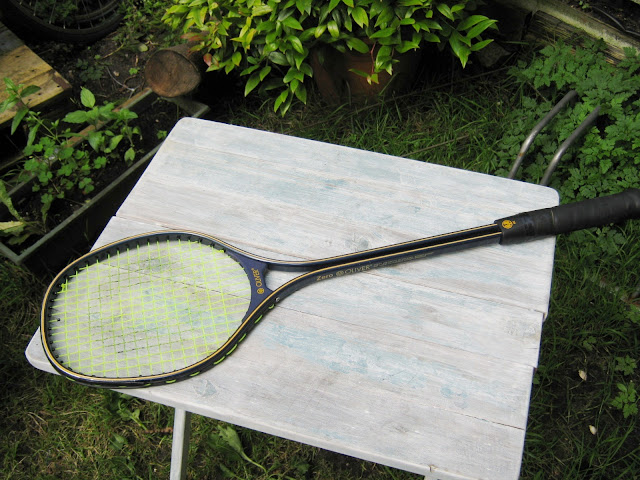 It took almost three months but a few days ago I had a serious bid, twice as much as I had hoped for and the guy came within the hour. Then at the door proudly showing his packed bag he told me he was actually on his way to the squash training center. 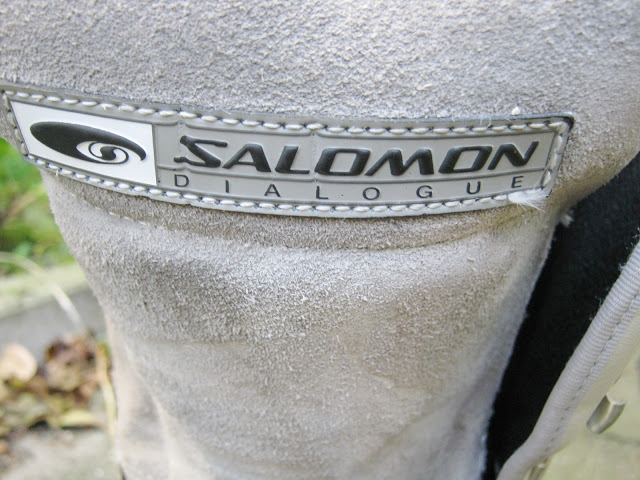 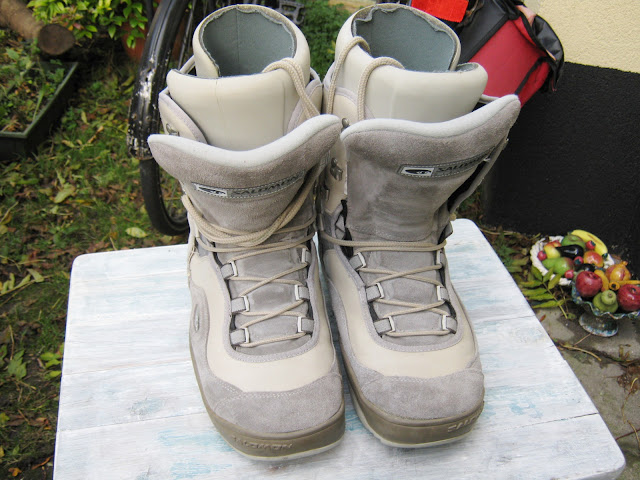 I the meantime around the corner I had found these Yeti-sized (US 12,5) snowboarding boots. Looking at the Salomon website I realized they must be a pretty old model, the new ones all looking less chunky and of lighter weight.  First bid wasn’t great, came quickly but it was withdrawn. Soon a second even lower came, but I decided to take it if he was serious. He showed up the next day. What a fruitcake I had at my door! Came on his bicycle from out of town in the pouring rain. Though he had a rain suit on, water had dripped in his rubber boots and his socks were soaked. He took his time taking off the Wellingtons to fit the new boots. Then as he slowly started tying them up I realized he was going to keep them on. Well not a bad idea after all. But he wasn’t gone yet. As he started walking up and down on the sidewalk he told me the boots were for walks in the snow.

But really, I was pleased to know that somebody had a good use for the shoes, as I didn’t expect to sell them to a real freestyler. And the amount of money that came in that day was still substantial enough.
Posted by Le-Chat at Sunday, December 06, 2015 No comments: