I’ve been busy, very busy. First, half April I started sorting stuff and packing for the first big street sale opportunity, the flea market on our national holiday, King’s Day. But rain was predicted, it was cold and we never went. Then the rain failed to appear and I was a bit cross with my friend that she chickened out, but it was still very cold.


Not listing a lot slowed down sales, but I still closed the month best of 2016 so far. 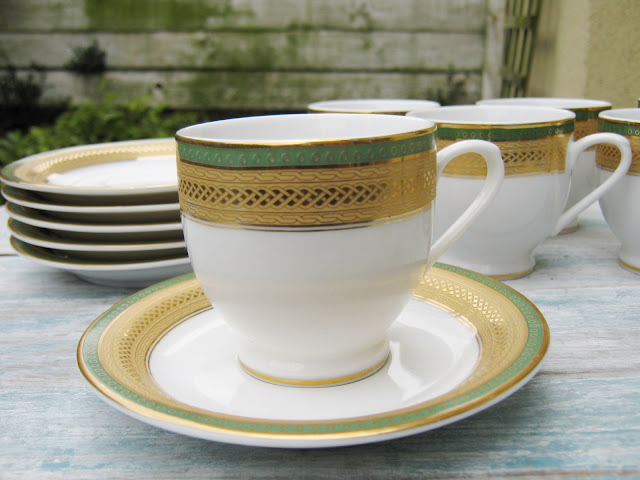 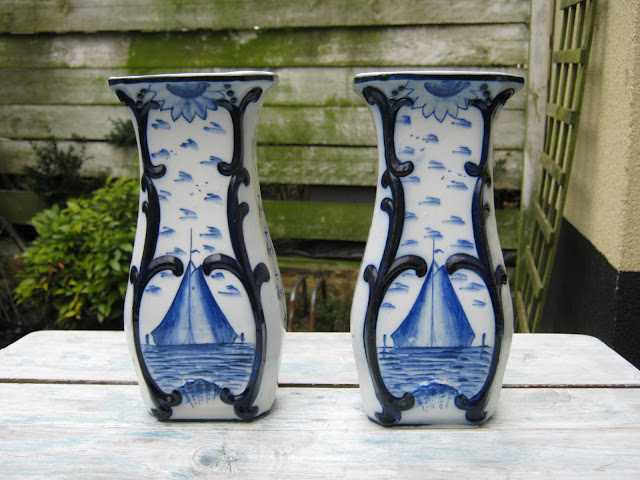 Pretty happy to get rid of the Royal Darlington coffee cups and the Dutch vases to one buyer, so it all went in one box and left my house in one go. The deal wasn’t great, but decent enough.

Then May started in warm weather which is not good for sales. People are having fun outdoors. I started sifting through my seven bags again, taking out all that I deemed not good enough for the car boot sales. That’s all we will have the rest of the season and we can only fit in 4-5 bags in the car each. At King’s day we are nearby her house and she can go back home for a second load while I start selling. 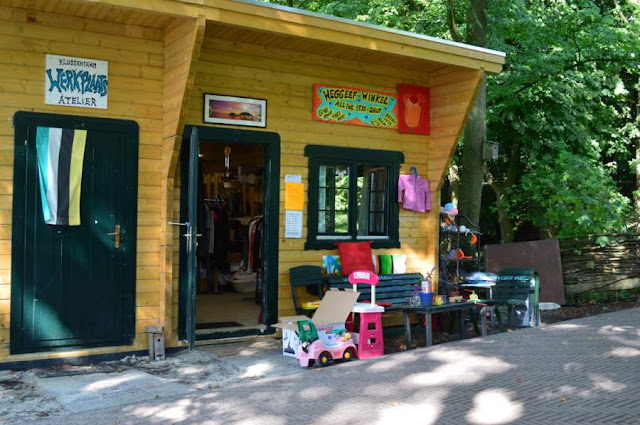 I brought the surplus to the free pick-up center. It took me about five bicycle trips, one every other day. It wasn’t a punishment with the pleasant weather. Not bringing back a lot to sell I was left with five bags for the next sale.

In the meantime I took the opportunity to do some gardening. 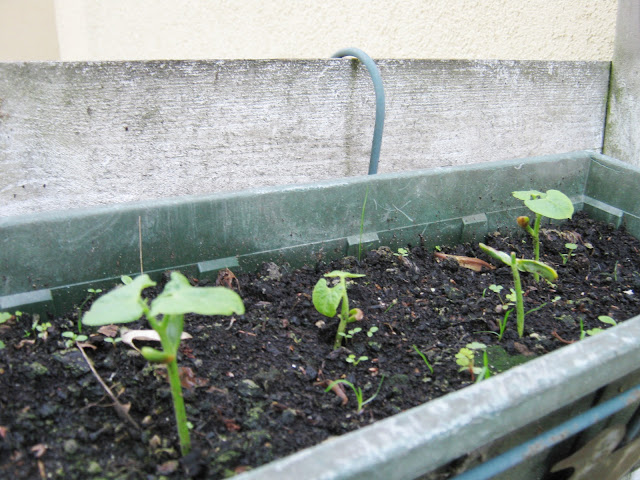 Green beans are coming up. 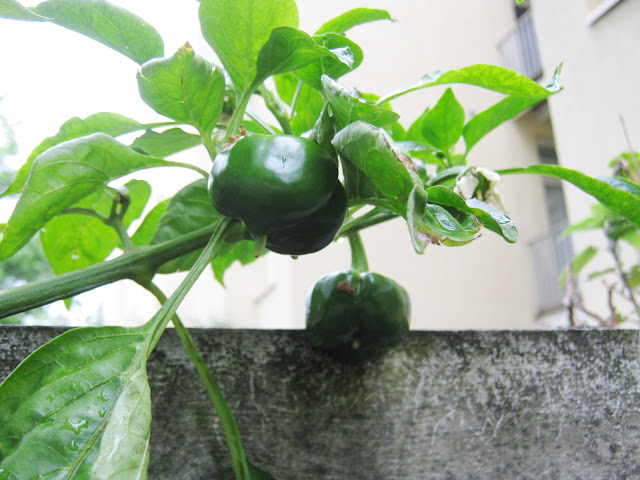 Bell peppers from last year that survived the winter indoors are growing some fruits already. 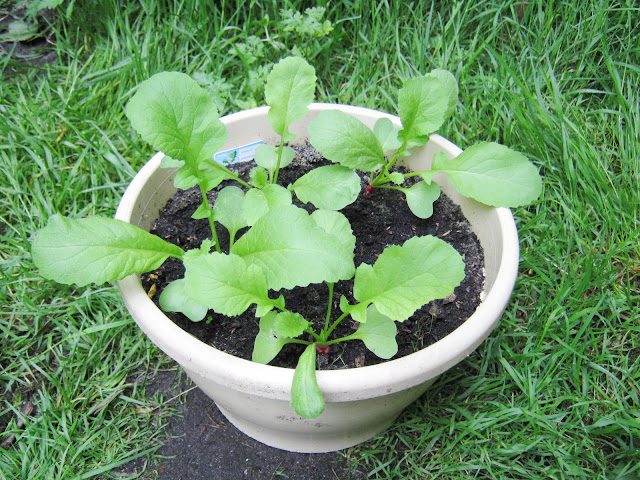 Radishes will be ready to eat within a few weeks. 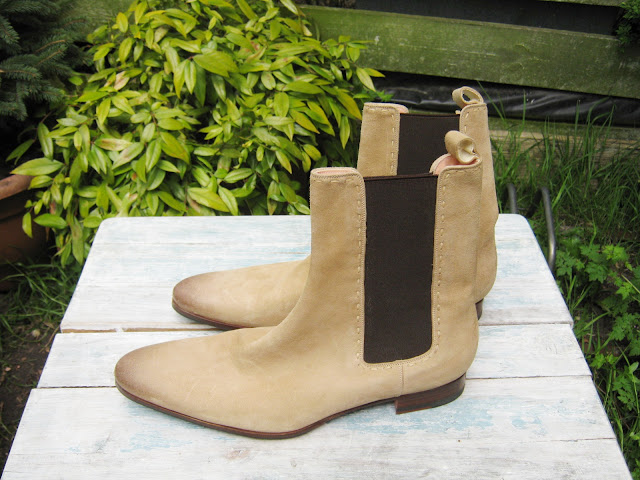 May promised to be an absolute low, and I was glad my friend finally booked for the event, then I had a big score. Across the street I picked up a pair of EUR 389 Italian men’s shoes. Being a small size I didn’t have too high hopes though. 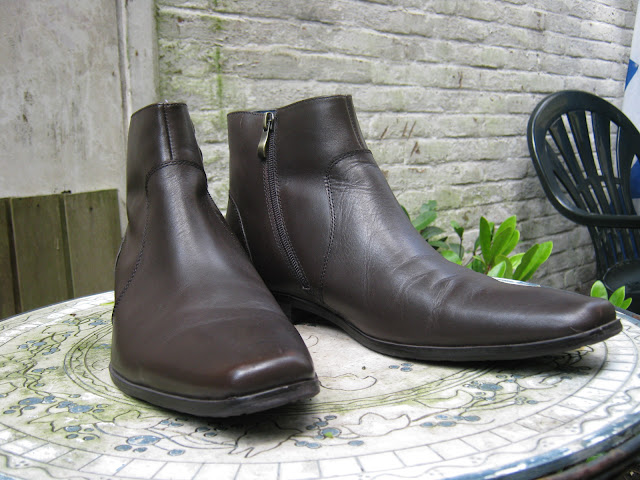 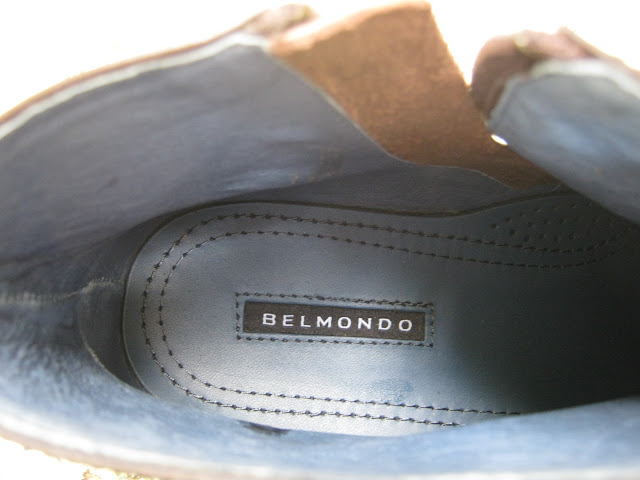 In 2014 I failed to sell this fine pair the same size on line and I flogged them at a market. 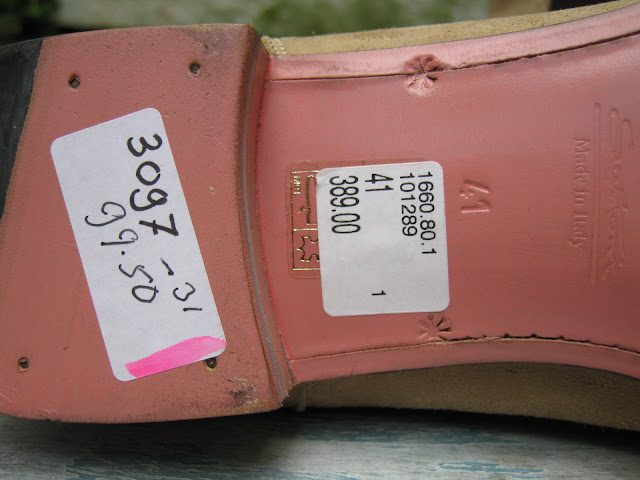 But I wisely removed the sticker with the outlet price before listing my pair of Santonis.

Well, I sold them within 24 hours at EUR 75. I didn't think it would get better and accepted first bid. But then there was someone overbidding, but not too much. I was thrilled enough with my 75. Second time since August I made such an amount in one sale. It made up for the whole month and with just enough 5-10 EUR sales I was ahead of schedule.

Finally last Sunday was the big day. The sale was on the parking roof of a mall, a new venue for us in a part of town where we hadn’t sold yet. Then some rain was predicted again, but we were very keen on checking the place out and repacked a bit focusing on stuff that is ok to get wet. Early morning it was announced that they moved the show to the lower parking decks, so we were covered.

We had a great day. The ride was short and convenient. Inside we were competently guided to our place. Everything was very orderly. We were a bit late and the crowds were already circling around and started buying as we were still unpacking. That can be a bit stressing but I’m used to it since we’re never the first to arrive. 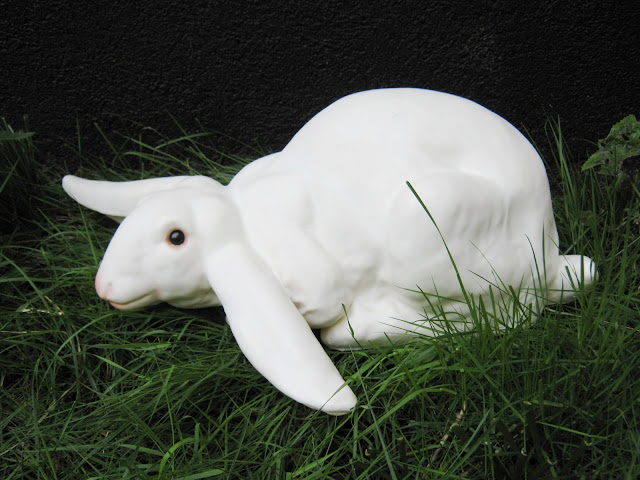 I had a lot of stuff that didn't go on line in the past 10 months. First out was my plastic bunny. It’s actually a lampshade, but I didn’t have the fixture and it’s cracked at the back. A recent find from across the street that I listed without much hope. Still I thought it would make a cute sort of garden gnome and that’s what the lady bought it for. I would have liked it for my garden, but my cats like that patch of grass and weeds. 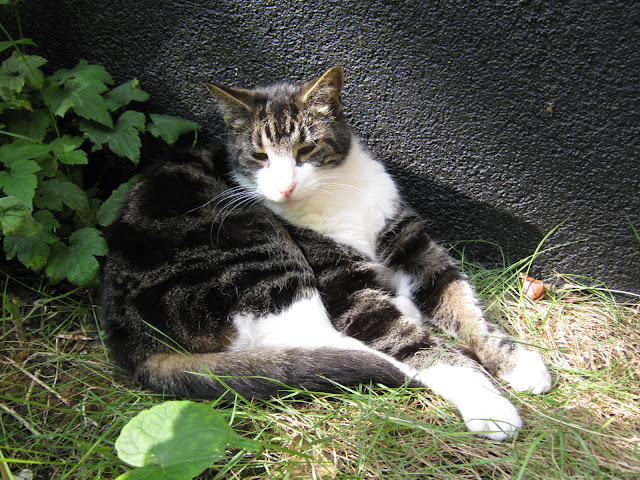 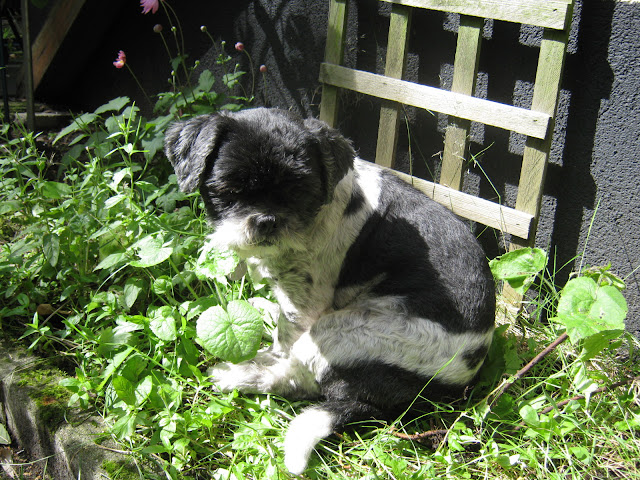 And Joey, my co-picker’s helper. 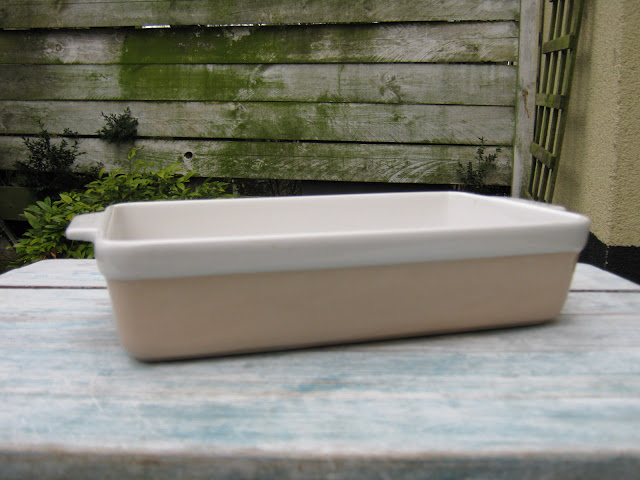 My friend sold my oven dish when I was looking around and priced it a bit too low in my opinion, but otherwise I might have had to bring it back home, so I said nothing. One of the duller things from the big loot, I’m glad it’s out. 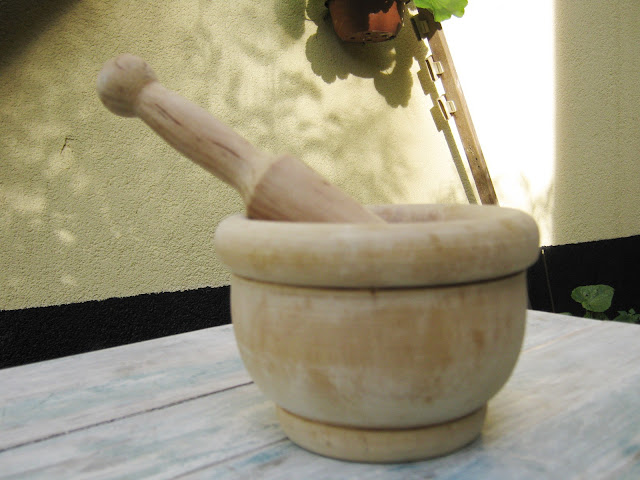 This wooden mortar was listed forever. Picked up on the way home from I forgot what. 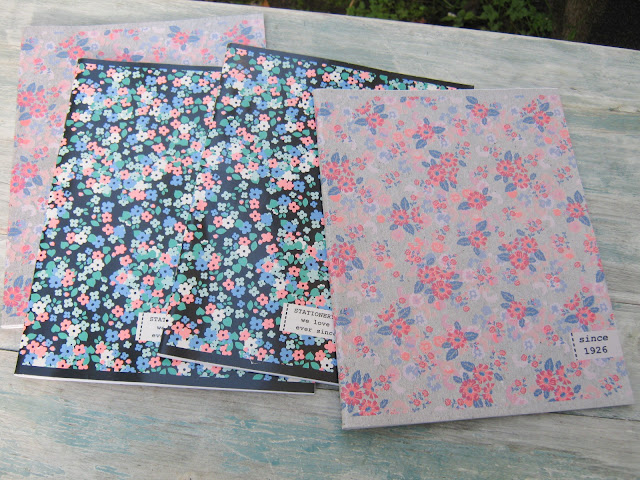 Four school notebooks. You get them new for next to nothing in packs, I got half of that. Not bad and a happy schoolgirl. They were in one of those suitcases I got from across the street. 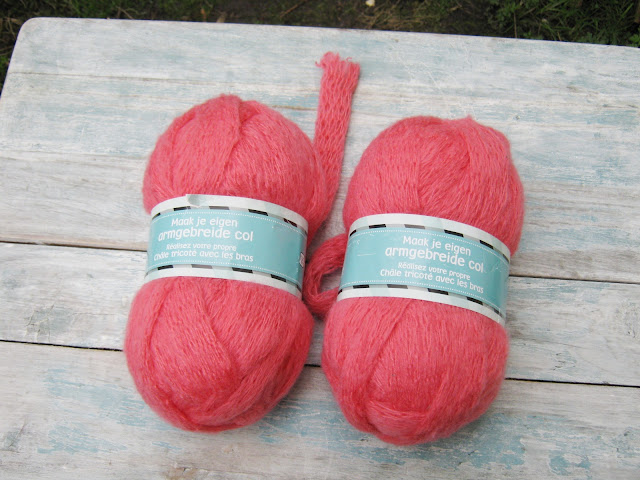 Two skeins of finger or arm knitting yarn. From co-picker. Last sale of the day.

All the rest, mainly shoes and clothing I never photographed to list. I lost almost one complete bag but did not make a lot because I priced low to get rid of the bulk. 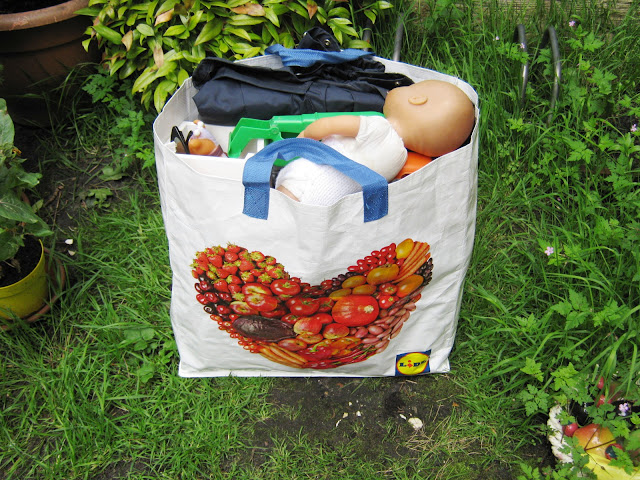 I'm looking forward to go back to this place soon. I had to leave one bag at home because the car was full, so if the same crowds visit I have enough new things to show.
Posted by Le-Chat at Saturday, May 28, 2016 No comments: