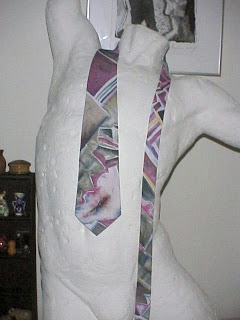 It's too bad I don't have a better and 'clean' picture of it, but I decided in a flash to give this find away before I had the chance.
When I found this polystyrene torso I didn't have to think a second before I carried it under my arm, despite the many dents and an awful beige paint. I painted that over with a leftover of creamy white curb found latex, giving it back a sort of white marble effect.
But only to find I didn't have place for it in my tiny home; as it didn't work out as a display very well after all, which you can see on the photo.
When I heard our friend Ed, who is of Greek origin, planned to make a Greek corner in his flat I couldn't resist. Well, to be honest I swapped it for a free meal (at less than 5 euro's) in the community center 'cooking club' where he does the dishes once every two weeks. He promised me the torso would get a prominent place on his rack.
Everybody in the restaurant thought it was a hoot, Ed was shining and I was glad to be able to declutter somewhat.
Posted by Le-Chat at Saturday, January 26, 2008 3 comments:

Email ThisBlogThis!Share to TwitterShare to FacebookShare to Pinterest
Labels: Decorating, For My Friends, Recuperation 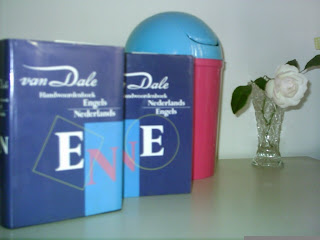 I picked up this little plastic bin last summer. Even though my house is so tiny it takes five steps to reach the kitchen bin, I still could use one for my desk. It's just a cheap thing you get for a couple of euro's in every household shop, so what's so special about it to dedicate a post on it?

First it's still another undamaged throw out that I rescued and didn't have to buy, no matter how ordinary or cheap. Second it was brand new and so shiny and clean I think it had never even been used. But third is that when I put it in its place I noticed how the colours match with my dictionaries! Two helpers that are, being a translator and a native Dutch speaker writing in English, ever present on my desktop. And that just made me very happy for a moment. It's not much, but I thought it was worth sharing.

Note that the vase is also a trash pick but the rose, for those concerned about global warming, is real and freshly picked from a public garden on January 6.....
Posted by Le-Chat at Wednesday, January 09, 2008 6 comments: 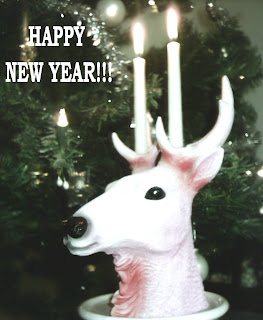 And this is the correct solution of the contest...
And we have a winner (Mary) with the one and only correct answer and a runner up (Julia) who came very close suggesting it was a lamp. No fellow bloggers, but both members of the HGTV craft boards. HGTV is one of my favourite communities. If you are looking for a very lively board to chat about craft or decoration I highly recommend it.
Congratulations to both! Julia, the pouch is on its way to you. Mary chose a lovely necklace from my shop which you can see at the bottom of this old post.
I never thought it would be so difficult. Of course, with the actual candle holders broken off the antlers it wasn’t easy to see and I only figured out what could have been stuck in the empty spaces when I found some wax drops on the head.
To share a bit of the fun with you here are the other guesses.
Is it some sort of a lighter, you squeeze it and a flame comes out?
Okay, does its nose light up like Rudolph?
Is it a Christmas Cookie Jar?
A tree topper?
Hmm... so maybe it's either part of a puppet, or is a tree topper? (Hopefully it's not a toilet paper cozy... :)
Was it originally part of a calliope/merry-go-round reindeer?
Antlers would make a nice plate holder.
A Lamp Shade.
I'm guessing it's original use was a 'mask'.
Do his antlers hold something-- I was thinking either a Christmas card or a book of some sort-- like a Christmas recipe book or a Bible? Or is he a wine bottle holder?
I think that the deer head is part of one of those animated wall 'trophy' items that are battery operated and sometimes motion-sensored.
Hmmmmm....did that reindeer head hold a decanter of some sort?
I thought the lighter was actually plausible. I've seen large table lighters in the most ridiculous disguises. Funny the tree topper came up twice. I've no idea how it could be attached... A toilet paper cozy? Thank god, no. I've never seen one in my life. In fact when I read about TP-cozies on HGTV I had no clue what they were talking about. I had to Google it! A trophy... you mean like that fish with a flapping tail on a plank?
Thanks for the fun everybody!
Posted by Le-Chat at Tuesday, January 01, 2008 No comments: