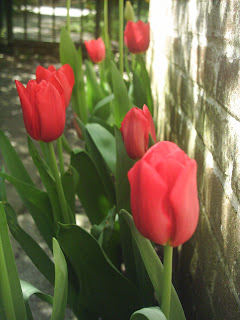 It's time to show what has become of my rescued bulbs. 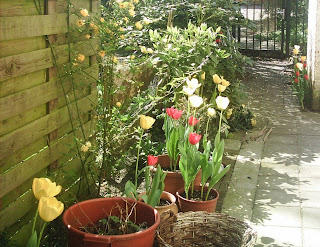 The fun is, as it turns out they were not all that deep red tulip Oscar, but a mix of those and a bright yellow variety. 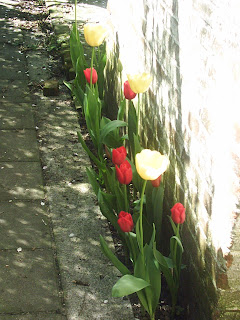 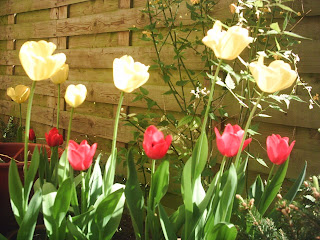 I hope I can divide the colours when I dig them up so next year I can make a nicer arrangement, but I kind of like this random mix too. 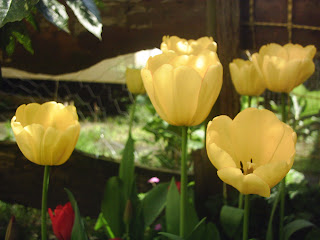 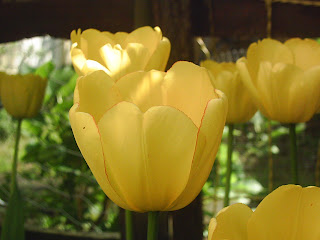 Take a closer look at the yellow flower; see that lovely fine red edge? Now of course it would be nice if anyone could give me the official name...
Posted by Le-Chat at Thursday, May 07, 2009 11 comments:

Despite Thursday's tragedy street partying went on as usual almost everywhere. Even with modern communication it takes a while before such information reaches all corners and I guess by then half of the country was already too drunk too be stopped or to be in shock. I suppose the real blow came for many when during the next day(s) the number of deaths (seven including the driver) was announced plus the fact that this was officially now confirmed as an attempted attack on the royal family.

As said in my last comment (previous post) I'm not a royalist at all, but it killed my festive mood and especially my pride over that story I wrote for the Etsy blog. So I just had to go over there and announce the premature end of our beautiful celebration.

But when I arrived in the park to see the boys I found they knew not much yet and I heard the usual noises coming from town as if nothing had happened. So from there later on the BF and I went for our tour for market leftovers as every other year. This time I mainly looked for books because since last August I have a venue at Bol.com to sell them on line. Collection was quick and easy. First corner we found the leftovers of a book seller and I loaded up my cart with about 50 copies. About half of them turned out to be good for the shop, the rest will go to the 'exchange box'. 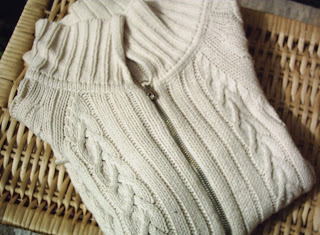 Further on we found some clothes from which one was a good sweater for unraveling. Nice blend of material too: 60/40 cotton/acrylic. Plus a nice reusable zipper. Then I decided that was enough and we went home to suck in the news reports.
Posted by Le-Chat at Monday, May 04, 2009 1 comment: