Last time I was quite militant, wasn't I? So now for those who prefer to read my blog for that reason, let's go back to showing some of the prettier trash found treasures. I don't want to talk about the pile of ordinary plates, cups, bowls, mugs etc. Apart from what I inherited from my family any addition to my kitchen cabinets comes from the curb. Honest, people throw out complete sets! But here are a few of my 'showpieces': 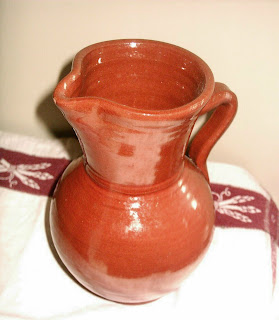 This crude terracotta jug makes a nice vase. I like it because it's quite probably someones project from a pottery class or so. Despite the crudeness it's well made and beautiful in it's simplicity. 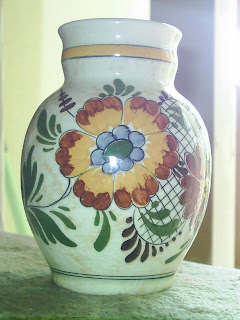 This earthenware piece comes from the trash of on of the few detached houses in my neighbourhood. It's the old lockkeeper's house; the old locks being out of use for years, the keeper's widow was allowed to stay, but recently she moved to a home and in the year previous to that we found all sorts of interesting things there. I can't say how old the vase really is or what it's worth because it has no factory stamp, only the maker's signature, but it is an original hand paint in the tradition of Delft Blue (even though this one is coloured). 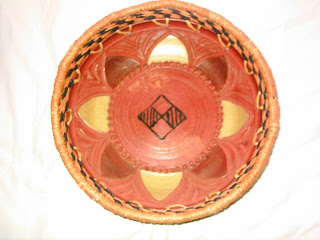 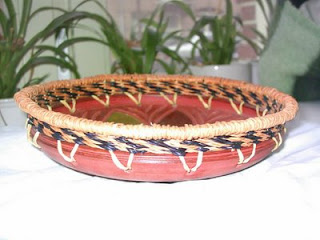 Here's a nice bowl that's not old, but certainly handwork and completely intact. I don't know what part of the world this comes from, India, Africa? If anybody knows, let me know! 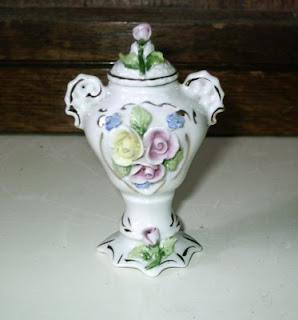 And isn't this cute? It's only 4.5'' high! A mass produced piece for sure and a copy of old styles, but it's fine porcelain and the paint work is still done by hand. As it's not really my style I put this one up for sale in my Etsy shop, in case you're interested.
Posted by Le-Chat at Saturday, August 23, 2008 2 comments:

Just philosophizing about trash and recycling a bit. But an important renewed explaining about this blog. Please, please read even if you think it's long... And some of the smaller stories from my life as a curb shopper that I haven't gotten around to make complete posts about that still need to be told.
The curb gives and the curb takes. When I put out old furniture myself it's usually stuff I already had for free and really trash. But somehow it even always finds it's way to a new user. That old school table (my dad was a teacher and he saved an old one and then gave it to me when I moved out) with rusty iron legs was taken practically from my hands by the old iron collector. Probably the same guy took my totally worn out ugly office conference chairs (present from work, I was in the purchase dept. at the time). They were gone within half an hour. And even my great aunt's ugly (though real oak) round table at least was gone in the morning. It's top was stained and had burn marks and I always wanted to give it a paint job or new varnish, but the thing was just to large for my house and after he found his fantastic table even my BF had no use for it anymore.
So yes I admit I'm guilty too of throwing things away... But as said, I'm afraid the thrift shop wouldn't have sold them and I make sure the other scavengers get to see them. I know a lot of people think the same way when they put out large things. It just happens you don't have place for things anymore. Elderly people move to a home and have to down size. The thrift shop will gladly pick the stuff up, but you just decided to give it for free directly to it's new users. OK, I can live with that. Though the thrift shop (GW, SA or whatever) trains people, you may not agree with their policies. It's often the smaller things (sometimes the cheapest plastic stuff) that are obviously really trashed that puzzle me most and prove the stupidest irresponsibility! And that's basically what this blog is all about. You'll find enough examples when you scroll down my posts, but here's some more recent ones to illustrate my point of view. Last week I found an opened bag of clean cat litter stones. Almost full. Well, there may be a sad story behind it, but with hundreds of cat owners in every street, couldn't they find a neighbour who could use it? Or why trash an almost brand new complete dustpan and brush set? Hmm, did they buy a vacuum cleaner? Perhaps they emigrated? Now the BF has a double set, but kept his old one to use on the balcony.
And then the toys. Recently I found more bags full of plush puppets that I'm definitely going to try to sell after washing them, but if their previous owners could have taken that little effort (machine does the job) they could have made other children happy with them. There also were a baby floor puzzle and a large wooden pull cart with blocks. Both neatly packed up in their original packaging, even taped up!. Used, but complete, intact, good and expensive toys, not plastic shit. A school or day care centre would have been so happy with them! They were hidden in plastic shopping bags (not sealed) between real trash, so I took those boxes and placed them visibly in front so hopefully someone took them.
I'm always really happy when I see other people finding great stuff. Like the young couple who found a baby bicycle (you know the real mini bicycle with the side wheels on the back wheel) for their little girl. Judging from their skin colour they were immigrants, maybe even refugees, people who have a hard enough time getting by I guess. I'll never forget the proud smile on daddy's face. Or the time we passed by and didn't take a very clean and new looking matrass, because we already have a great curb found matrass. When we came back from another direction we saw a young man, a student I took it, struggling with it on his bicycle. We saw a couple, probably in their mid fifties, loading up a set of the cutest kitchen cabinets (real wood, not ply or pressed) on a cart. They didn't look like curb shoppers and were a bit startled when we congratulated them with the find, so I just figure they had accidentally stumbled upon the cabinets and took them for a child that just moved out to his or her own flat. Or that young lady (she looked educated and trendy!) with her vase. It was huge and looked like some sort of African primitive art. Beautiful, I might have taken it myself! It must have weighed a ton because she had to go and get her cart for it. I think she too just went outside to place her kitchen trash and stumbled upon it.
I already posted about clothing but I just want to add how really stupid it is to put clothes on the curb (because of the alternatives in my country). Of course, I'm happy when I find them, but especially in my neighbourhood, they only have to walk a bit to drop them of in a special container, placed there for Amnesty International. They are all over the city, but this one is right in the centre of my 'shopping area' which includes no more than six streets or so, so any clothes I find are never more then two streets away from it! In fact I just Googled to find this picture and learned these containers are all over the country.

So this is not the actual one near me, but just an example to give an idea because I don't know if anyone overseas is familiar with the concept. Anyway, you know what I do with curb found clothes I can't use? In there, of course, never back to the curb! And I guess Amnesty would be happy with those plush toys as well.
This morning I went for groceries early and before my local thrift shop (it's on my way) opened. When I passed there I already saw some plastic bags placed on their doorstep. On the way back I saw more goods placed by their back entrance. Good to see people bring their stuff of course, just makes me wonder: are they avoiding contact with the shop personnel?
Brings me to a discussion I found on HGTV (read here). Someone was (rightfully I think) complaining about a GW store refusing her stuff. But it brings two questions in mind. One, of course if thrift shops have such a luxury problem, it says something about how many perfectly good to use goods there are around in the rich countries, where in the same time we just go on producing new stuff! It's crazy!!! What if the crisis hit today and no more furniture, clothing and such were produced? For how many years could we go on without a problem? A lifetime, believe me. Second, as I found the question on the T-2-T board, I was asking myself how come they still have so much stuff to offer to GW and SA... But that's not really criticism, as I don't know the stories behind it. I generally love what these ladies are doing.
It has become a long post without much pictures, so I want to end with one of my own after all. A bit OT, but not completely. Remember that second hand display head I bought through Etsy I showed in the post about the craft market? That lady who sold it to me was so sweet, finding out I'm a yarn girl who likes leftovers, instead of normal parcel fillers she used old yarn she had no use for anymore. It turned out to be 100 % wool bits of tapestry and embroidery yarn, perfect to use in my felted flowers! 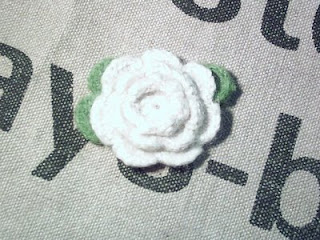 Here's one of my favourite results so far. The flower itself is my own yarn (which I bought for next to nothing from a man who kept it for years after his crafty mother deceased), but the leaves are made of hers. For sale in my shop of course. If you like look here for the sale info.
It really has become a long post and I hope I didn't bore anyone (I know myself I tend to scroll down when posts are to long). These were stories I've been wanting to tell for a long time but just never seemed to fit in anywhere. And somehow I felt the need to explain once more why I curb shop. I'm not greedy, it's not about getting free stuff, it's not even about making great benches from bed headboards or shutter boards (no matter how cool that is and I admire these people!!!), but about showing how we overproduce and right now that's more than bad for the Earth. We don't need all that new stuff, it has to stop!!!
Posted by Le-Chat at Saturday, August 02, 2008 10 comments: