About ten years ago I found a pair of boots - the ankle height type of the model you see at the bottom of this post - you know the kind, they're pretty common but the greatest to wear under jeans. They were used but good enough to last me another five years. By then the leather soles were really through and I had to part with them. 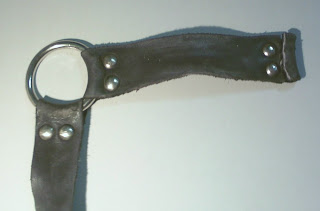 But not until I cut off the leather straps to keep those nice large metal rings. They then disappeared in a drawer waiting for a project to be used for. I've been close to do the obvious and use them in a bag, but something told me they should end up in some sort of jewelry though I didn't know how or what. 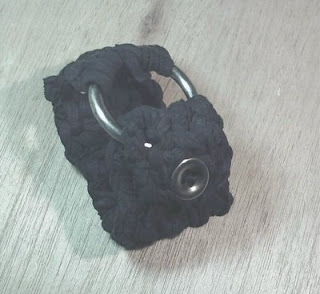 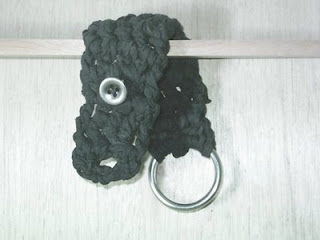 The answer came last week when I was looking for new metal parts to use in my rag bracelets. I ran out of the coat closures and wanted something more sturdy anyway to create a bracelet that would suit guys as well. I think this turned out quite groovy! If you want to view the Etsy listing click here. I'm now working on a model without a button that is adjustable and looks even more masculin. 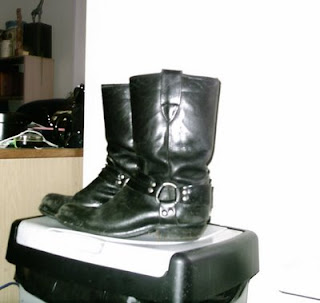 In the meantime I threw out my other boots as well. I bought these in 1991! I must admit I didn't wear them while I had my curb found pair because they were more comfortable. But I turned back to my bought boots until the soles (rubber) broke in two parts. Even though they still look pretty neat they were beyond repair. And of course I also kept the rings. These are a bit smaller and will be great for a more unisex type of wrist band, but who knows what they will end up in.
Posted by Le-Chat at Sunday, February 22, 2009 3 comments:

A long time ago I wrote about the simple rack we gave to our good friend Ed to display his collection of musical instruments on. In fact we only picked up this guitar-like instrument because we thought of him and we were just waiting for the proper occasion. So when he invited us to join the celebration of the 20th anniversary of his arrival in Amsterdam we were ready to go and didn't have to go shopping for a present.
It misses most of its strings but it's otherwise in good condition. Though nobody at the party had ever seen anything like it before it's a real instrument to be played on, not some kind of toy or decorative thing. 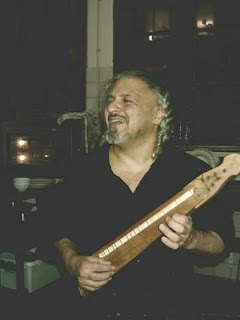 And at least our man is more than happy with his new curiosity. Now the only thing I still haven't done is to go over to his place and take a picture of the complete collection on that rack. But as I promised him a frame from my curb found pile for a drawing someone made for him I hope to get that opportunity soon.
Posted by Le-Chat at Friday, February 13, 2009 3 comments:

Email ThisBlogThis!Share to TwitterShare to FacebookShare to Pinterest
Labels: For My Friends, Weird Finds

Though it's not as bad in Holland as the in rest of Europe we're still having the coldest winter in thirteen years or so. Meaning late night trash excursions are not always the most pleasant and there's less to be found as well. Packed up in warm coats and scarves we make a bit shorter walks and leave the few big things for they guys with the vans. It's certainly not the time for big hauls, but I still come home with a little something most of the times.

Last December with a temperature below zero and a biting wind, when we intended only to go for dumping our waste glass and paper a man just put an old chandelier on the same corner. It's not the first time we found a chandelier and I still have a lot of the plastic beads from one my BF brought home years ago. 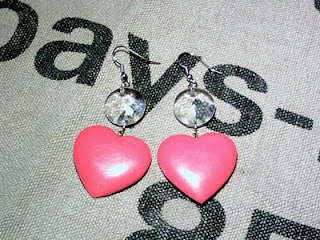 The simple flat beads were the perfect addition when I wanted to upgrade these Eighties heart earrings. And they went too at the market in December. 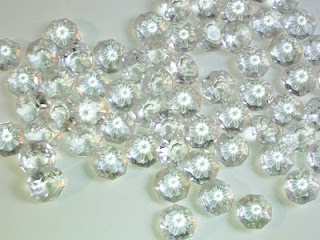 So I was happy to find some more but still with my gloves on I pulled off only a handful of the bead chains and then we went quickly home. Only there I found my new beads were not plastic but glass and wished I had taken more. Next time I'll take the whole lamp after all. Still after washing the dirt off I counted 65 shiny beads!
Posted by Le-Chat at Saturday, February 07, 2009 5 comments: 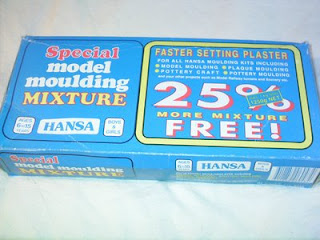 Another one of the more curious products we found in our favourite shop that we call 'The Last Order'. At least on a quick Google search I couldn't find any place where you can buy the stuff on line.
The pack looks old but it hasn't even been opened and the contents feel soft so I'm sure it's all in perfect condition. I've no idea yet what I'm going to make with it, but this is just one more proof even specialized craft shops are places I don't need. And I don't even want to start about the piles of half full paint cans, glue bottles etc. I've collected.
Posted by Le-Chat at Monday, February 02, 2009 5 comments: