Come Curb Shopping With Me 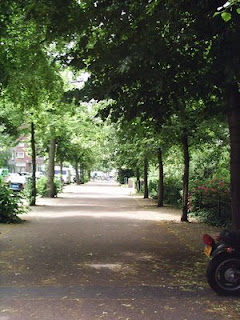 I live in an old but very green part of Amsterdam, very close to the historic center, but evenly close to parks and nature, almost near the edge of our town. This is just a very nice walking lane next to a playground around the corner from my block. Now, first I want to tell you something about the trash system in my neighbourhood.

Across the road at the end of my street, is a fairly new group of blocks that were built around ten years ago. They call it the eco-friendly neighbourhood because in between the blocks no cars are allowed. There are only footpaths and lots of green. Around it are underground trash collection points where people can dump their bags in anytime, so they don't have to wait for trash night, next to the more traditional containers for paper and glass.
Over time, when more old buildings were torn down and replaced by new luxury apartment blocks, more of the underground collection points were placed in other parts of my neighbourhood, provided there's enough place for them. But there will always be enough traditional collection points that can only be used on trash night in the older narrower streets. These are simply blue iron poles placed around 50 meters apart in every street where people can leave all bags and bulk trash. They make the work of the trash men a bit easier as they don't have to stop in front of each door or go look behind parked cars. Even though you'd think the underground containers take most trash from the sight of pickers, it's unbelievable what collects around them on trash night. Often they're full by then, but on trash night people place everything that doesn't pass through the openings, like bulk trash but also boxes with small goods, around them. In fact they've proved to provide us with some of our best finds.

Now let me take you outside with me and take you on a tour to show you some of our favourite shopping spots. In daytime that is, because my camera is useless in the dusk and who wants to see piles of trash anyway? 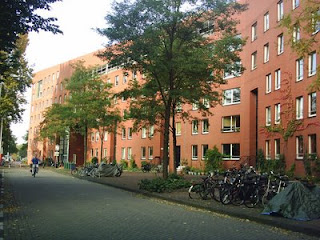 This is usually the first street we take. It's alongside the 'Eco-'hood' as it's generally called. In the middle, where you see the cyclist is the first group of underground paper, glass and other waste containers. It's right there we found our fantastic couch. It's also a first stop because it's where we bring our own waste paper and glass. 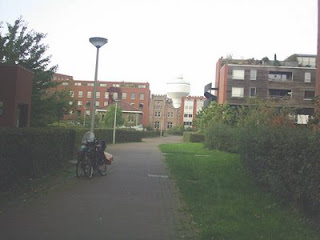 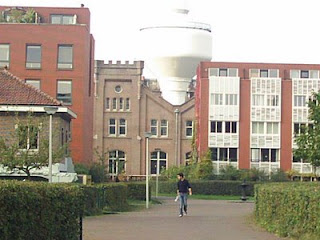 After a second collection point further on we turn right into the footpaths between the blocks and come back this way. As the houses were built on the premises of the old water company, you can still see the watertower (that 'spaceship' in the back) and some of the old 19th century industrial buildings (these are now official historic monuments), now turned into a restaurant, a tv-studio and theater. 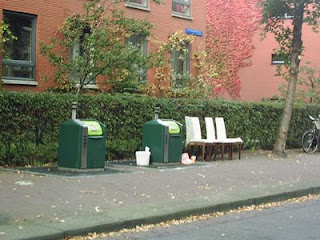 We then find this collection point to our right. Here you get a better view of what the containers look like. The 'chimneys' on top are used to pull the containers up from the ground. Once they hang in the right position over the truck the bottom opens and the contents fall into it. It works the same for the glass and paper bins. They look the same, only have different openings. The chairs are not supposed to be there as it's Saturday afternoon and trash night is Sunday, but I take it someone is hoping they will be found by someone before the trash van passes. 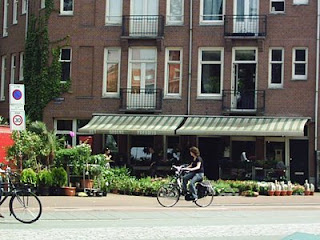 From there we have various routes through the old streets around my own house with the traditional collection points, to arrive here at the flower shop. There are 'undergrounds' to left, not on the picture, that have been put there more recently, less than two years ago I think. If you want to see some of the gifts of the flower shop itself, take a look here. We found our dresser in the street straight up from the left of this block, which we go up and down. 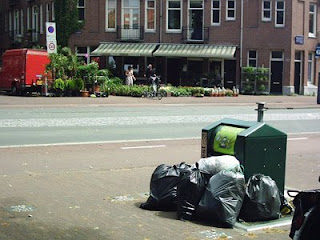 This bin is across the street and proves that on a Sunday afternoon it is already filled to the brim. 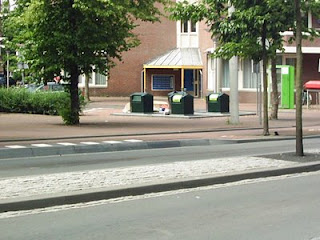 We then turn left past the shop to arrive at this recently re-furnished square. There are one collector for glass, one for paper and two for other waste. It looks really neat now, but believe me in a couple of hours it's an enormous mess. The paper container is always full, so countless bags full of magazines and newspapers are placed next to them. Objects like lamps, pottery etc. could pass through the openings of the waste collectors, but people always put them in boxes next to it. Then there's always a lot of bulk trash; I guess the wide space invites people from across the street and more far to bring it here instead of placing in on their own narrow curb. By the time we arrive often other pickers have gone through it all and don't place items they don't want back in the boxes. Sometimes clothing is lying all about, being pulled out of (unsealed) bags. Plus there are the stinking bags of regular kitchen waste if those collectors are full as well. And even those are being cut open sometimes! I'm not very proud of it and we never stay too long here. I've found some interesting magazines and take a quick peek in the boxes for kitchen stuff, I've found nice shoes and lamp shades and such. If it jumps in my eye I take clothing for recycling. But I don't go rummaging through the dirt, not only is it beyond me, I just don't want to make the mess worse! But is here we got our television set. We were just crossing the road when we saw a man coming out of the building in front carrying it in his arms!
From there on it's back home via various routes. All in all it's been a walk of about three quarters of an hour, only if we linger or find something great that I have to go pick up a cart for it takes up to an hour and we hardly ever go more far. I sometimes still can't believe how much we find in such a small area!
If you enjoyed this post you may also be interested to read this old post about my house.
Posted by Le-Chat at Sunday, October 12, 2008 9 comments: