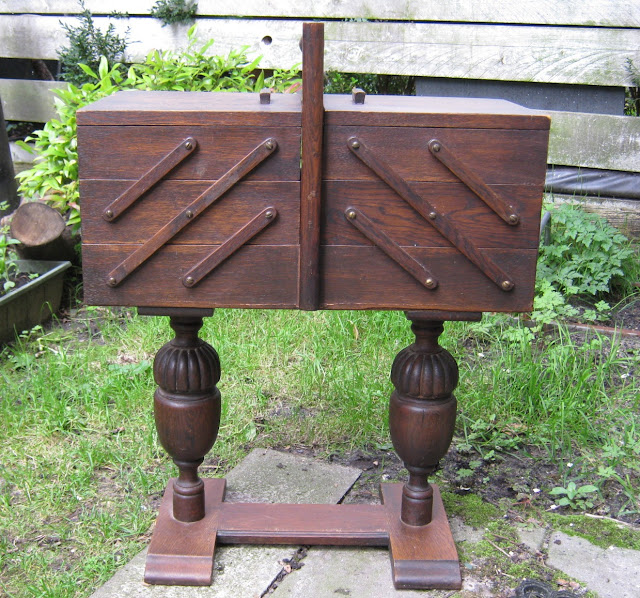 The Man brought this home for me around the millennium change, after I had announced that I was going to work less and craft more. Found somewhere along his route to a shop. I remember seeing the square fold-out boxes in the Seventies, but we never had one at home. I think my mom hated them. I have to say I agree, but those were possibly copies and this one is almost antique and I did like the legs. They are in the same style as my vintage dresser. 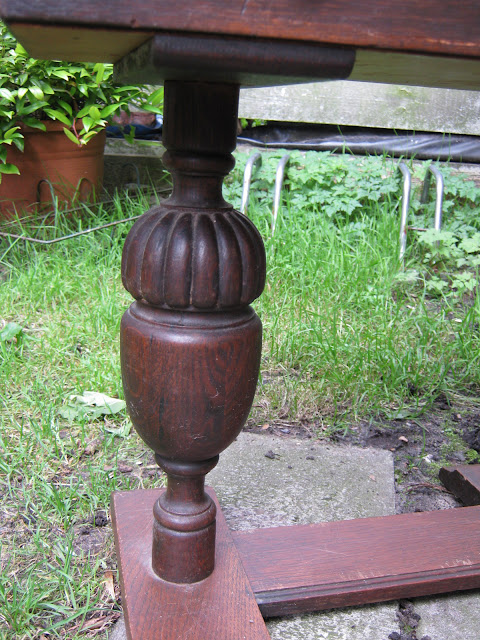 I sold the thing in 2015. I knit and crochet more than I sew and it got in my way. The contents easily fit in a drawer. It hurt a bit to sell a gift that at the time meant to say he accepted the change to living with less money, but I haven’t missed the object once. I’ve got so many pretty curb finds to keep! 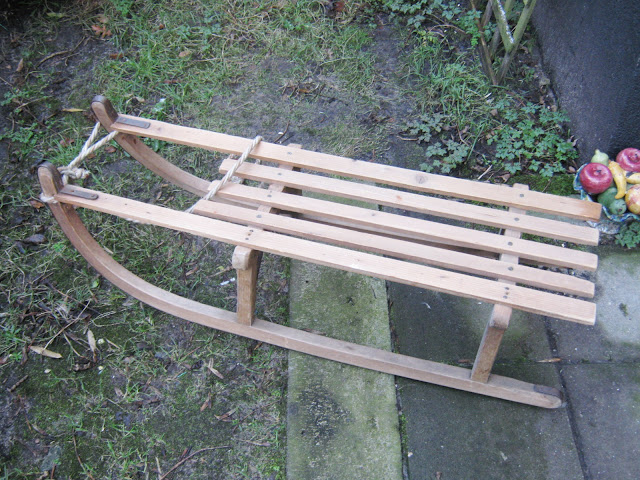 I found this sled last year January at a fair distance from the house, so it was a bit of a hassle getting it home on my bike, but I managed and I thought it was a pretty good pick. But then the thing just didn’t sell. It wasn’t snowing or freezing here, but wasn’t anybody planning on a skiing holiday abroad anymore? I looked for my competition and found lots of sleds for sale, but all in rural areas, not around Amsterdam.


I waited for October to relist it and then it went quickly. Not the head prize of course but I was glad it was out. And I think it was for a skiing holiday. Right now Holland is slowly freezing over for the first time in years and shallow waters have thick enough ice already. I wonder if I should have postponed my relisting even longer to get more out of it, but I don’t regret my sale; the weather is unpredictable after all. Now if we can get some snow I like the thought that the child it was bought for can play with the sled at home too. 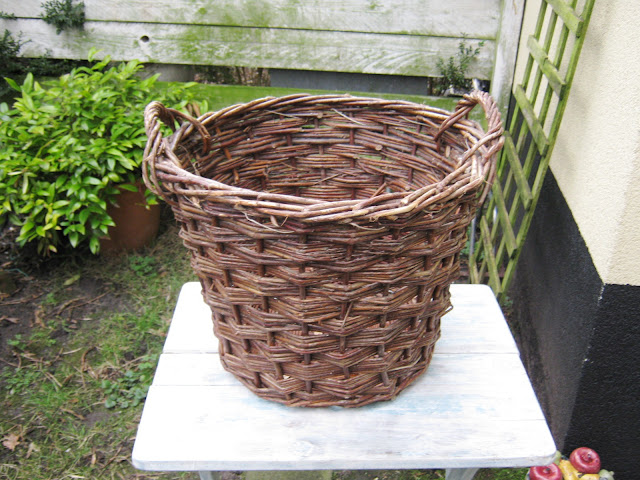 I’m just looking through my old photo’s now and shortly after the sled this comes up. I’m only showing this simple crude basket because there’s something time related to say about it as well. Found across the street it was an easy pick and though not worth a lot I couldn’t leave it.

It was previously used as a planter, sewing thread that held the plastic lining in place was still visible on top. Listing at only EUR 2 I thought it would sell soon enough. There's always somebody who needs a basket. But I had to relist it over and over again. I had at least seven inquiries about it, but none came to a sale.

Finally when December neared I threw in the keyword ‘St. Nicholas gift basket’. When celebrated in the traditional way, on our national gift-giving day December 5 the family sits in a circle around the packets presented in a large container and a basket is perfect for that. I guess it worked as I sold it a week later, just days before the party.
Posted by Le-Chat at Sunday, January 22, 2017 2 comments: 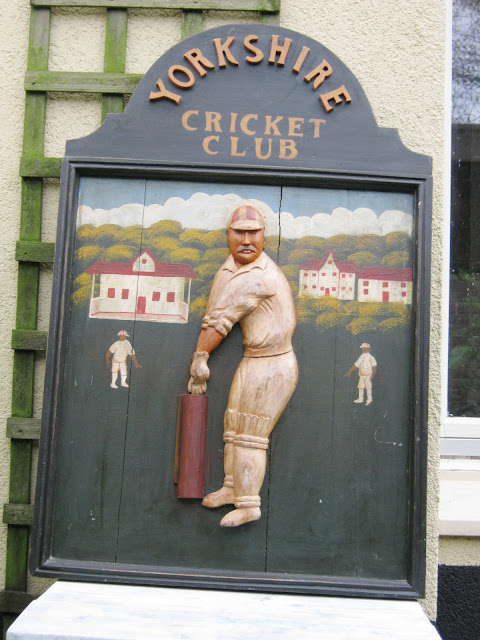 I’ve seen a lot of these signs in bars and restaurants in my days when I still frequented such places. But those were mostly food or drink themed. Actually my co-picker found it in November 2015. I doubted if it would go quickly. Cricket is not big in the Netherlands and mainly played by posh university folks. 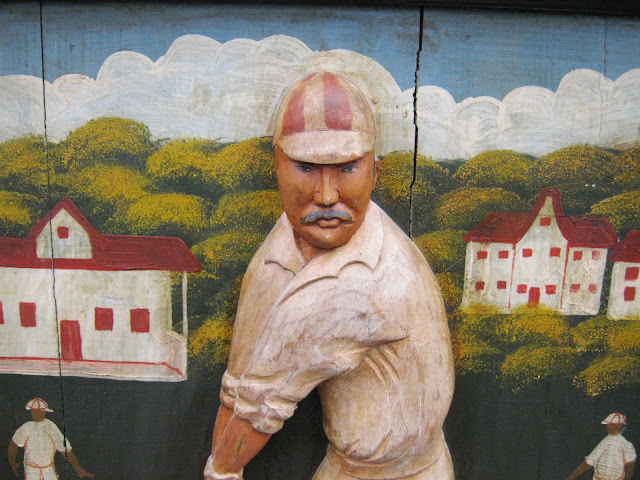 However I liked my cricked man because his friendly face reminded me of a co-worker of many years ago who was a pleasant peer to hang out with.

My friend liked him simply because she is of British origin.

My real cricket player finally found his way to my board halfway February. Indeed he was from Leiden, renowned for its university and was going to hang it in the club house. 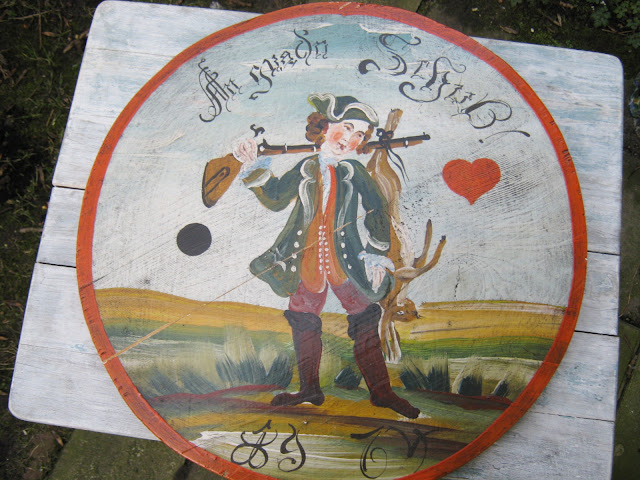 This smaller one is obviously a souvenir item, most likely from Germany. On top it was half cracked through the middle. But then, anything handmade is worth rescuing. Found across the street late February. This took until June to go. The buyer wrote in his email that is was to decorate his Alpine themed caravan. Sounded cool to me, though there aren’t any high mountains in the picture.
Posted by Le-Chat at Sunday, January 15, 2017 No comments:

Email ThisBlogThis!Share to TwitterShare to FacebookShare to Pinterest
Labels: From My Friends, Paintings and Pictures, Selling Trash

Three Nudes And A Still Live 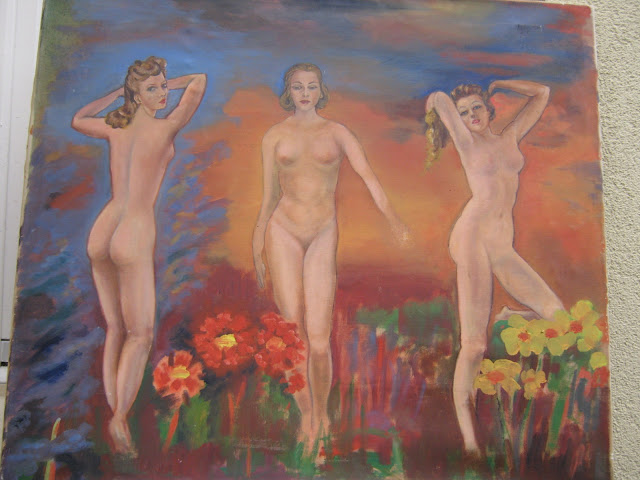 This large work looked the most interesting at first and I listed it soon after. I didn’t think it was great but the charm is in the hairdo of the girls, representing different style periods from around the 1940’s to the 1980’s. The year ’80 was on the back side. I thought it would go quickly but it took until September. I had to ship it so no clue no what type of person bought it or why, only that it was a guy.

But here's the proof that real art can still be found in the garbage: 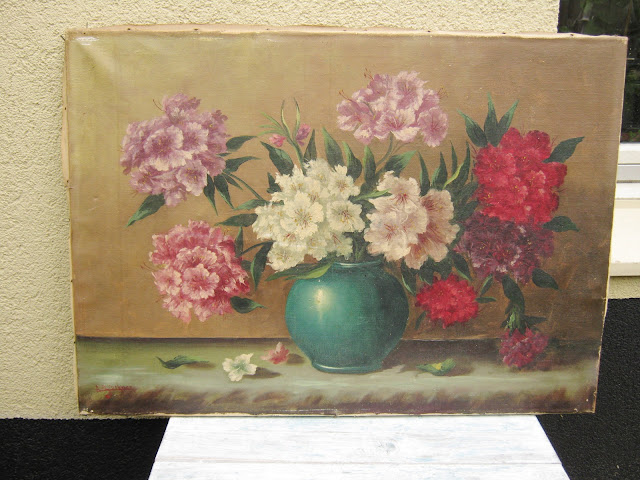 Freek also brought this still live that I thought was quite nice but hesitated to list because of its poor condition, especially on the sides of the canvas. It was falling out of the frame which was very ugly anyway. 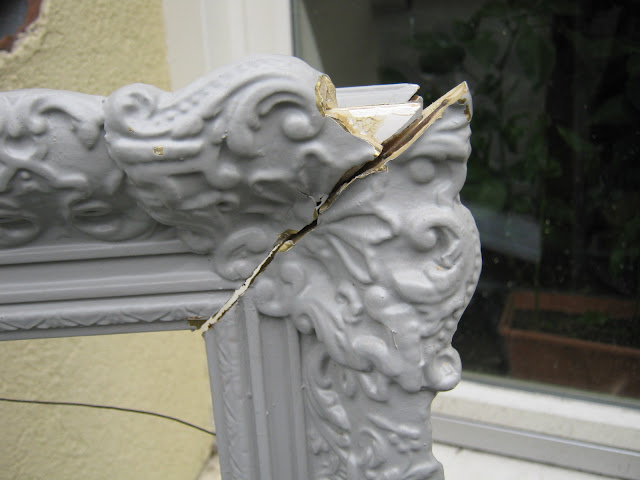 Painted over in grey and in terrible condition as well. I threw that back in the trash hoping someone would take it, but I didn't check. 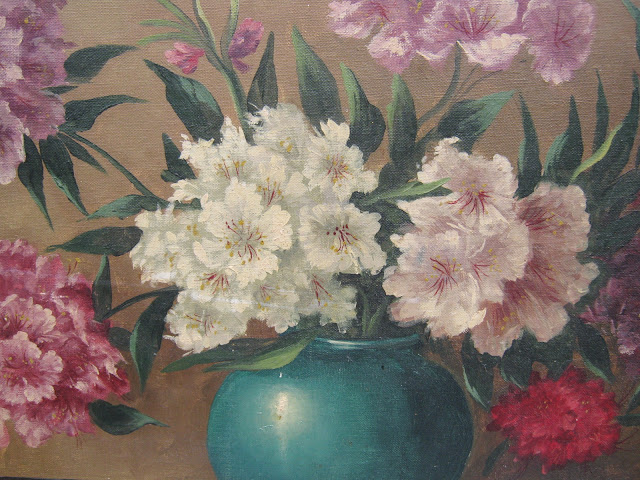 I finally put it up in April without the frame and sold it within two days and I now know why! A very well dressed man came for it and I’m sure he was a trader. And I possibly gave it to him way too cheap. 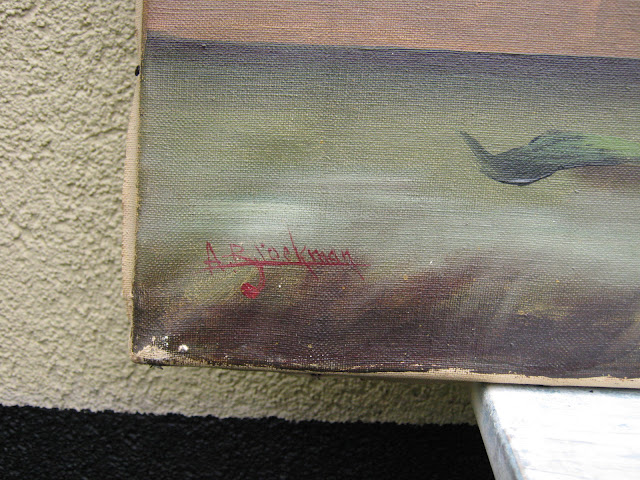 At the time I couldn’t figure out the signature on the work and so I didn’t find the artist. Just looking at the photo’s now I had an insight and looked for A. Broekman, and found he was a Dutch painter who lived from 1874 to 1946 and was himself a trader as well. I read he often signed work of others, so we still don’t know if this was his own, but I found a comparable still live with poppy’s listed currently at EUR 300! But that is neatly framed and in good condition. And there are others around EUR 50. Mine certainly needed work and I’m just glad it ended in the right hands and is hopefully now restored in full glory and somewhere being appreciated.