I found this mirror set about a year ago at only fifty yards from my apartment, at the corner of our block. I date it late fifties early sixties. The shape of the triptych mirror panels is still quite romantic, but the formica covered tablet with its plastic gold coloured lining definitely taste early modernism. Then the back support of the mirrors and the mini compartment below are solid wood. Only the knob of the flap is modern again. It’s a wonderful mixture of two style ages and I did not have to ask myself twice if I wanted to take this piece home! 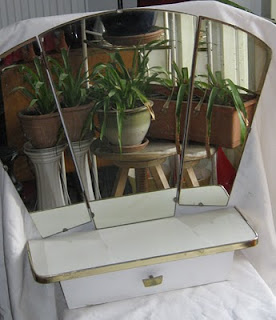 What it was designed for is I think a mini dressing table for a tiny bedroom (so common still these days in my town, Amsterdam) or a as a hallway piece for a quick check up of the face and hair. The tiny compartment could have held a comb and brush, powder box and lipstick placed on the tablet. Which would have been handy to lay a pair of gloves on as wall.

I would have loved to keep it but the problem is I have a fairly roomy bathroom with a wash stand and a wide mirror with a tablet over it. And in my bedroom I already have a pretty large circle shaped triptych mirror. Then my hallway is so narrow I feared my tall BF or visitors would have bumped into the set constantly. So… 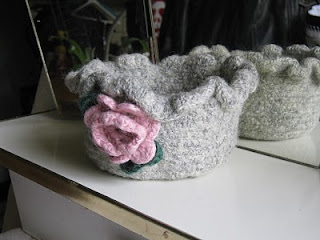 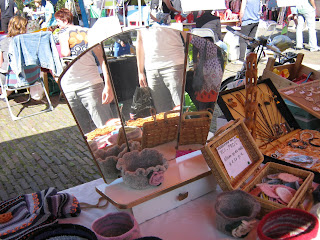 After having used the piece to photograph my felted make-up bowls on I decided to take it to the craft fairs as a display. Threatening to get sold of course. Not the first time, but that was in June when sales were low anyway. But last Sunday within a few hours one lady already inquired if it was for sale. She told me it was for a baby bedroom, an idea I didn’t like too much so I held her off saying she could pick it up at the end of the day. I didn’t really expect her back so when later a young woman was totally in love with the mirror I sold it to her immediately at the same price I had asked the first lady, 15 Euros. With the fading silver, hang-up hooks removed and rusty hinges I thought that was a fair price for a still quite unique piece. Not bad for rescued trash, isn’t it?
Posted by Le-Chat at Tuesday, September 07, 2010 6 comments: