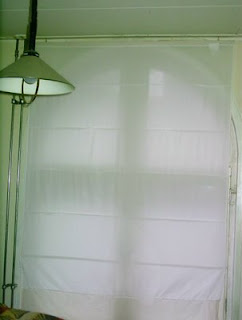 This is my front window. As it faces the street directly (we have no front yard) I want it covered completely with a non see through material that still lets in enough light. But I also had a construction problem. The bow shape, the central heating pipes and a plasterboard placed in front of the stone wall (which they probably did for isolation and to be able to construct a windowsill, not present before the renovation), make it very difficult to hang up any kind of normal curtain rail or rod. Sorry it's not a great picture and now that it finally hangs maybe I will get inspired to paint that wall and window pane too. 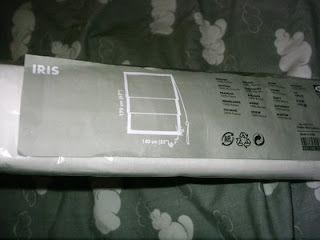 The solution is a simple white thin cotton pull up curtain. I just screwed two small hooks in the ceiling borders to hang it up on. Not even electricity required; a hand drill was enough to make the two tiny holes in the thin planks. 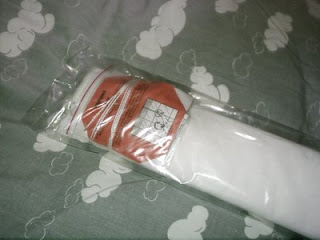 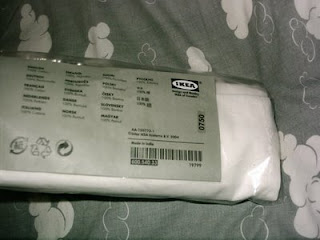 The solution was offered by IKEA. Well, sort off. The nearest shop for me would be a long bus and metro ride away and take me at least an hour. Luckily my neighbours like to shop there and just buy and buy and then just cast out what in the end they didn't need or didn't fit after all... Yes this curtain just came brand new from the curb to me and had never even been out of its packaging. I only had to make it a bit longer which shows in the slightly darker colour at the bottom for which I used another but used curb found piece of curtain.
It's not the first time. I have IKEA slat blinds on my hallway door that had never been unpacked and (this is a very old post) that picture frame with plastic 'glass'. Just recently put a curb found Dali repro in it. Looks cool!

So what is it with IKEA? Are they really that cheap that people just take home things to try out and don't care to bring back? For me they have changed from a cool company that offers affordable modern design in honest products to a monster multinational that exploits people in poor countries and sells mass products that people don't care to keep if they don't need them for a certain moment. I'd think the crisis would change that, but I don't see much effect on the curbs yet. Don't even want to start about the pile of IKEA duvets, pillows and covers for those and towels I found.
Eh, what I really want to say is, thank you IKEA for being so cheap so I can get the stuff for nothing at all, but really, when are we going to stop wasting? Me alone I can only rescue so much, you know.
Posted by Le-Chat at Monday, July 27, 2009

If you are in the gratefull mood you
can express your feelings (and place your orders)to a big recumbentbike friend of mine. Who happens to work at Ikea Z.O.
http://tinyurl.com/nphmrw

Ah, your dyslectic cycling friend! Well I say YAY for cycling and propagandizing the hobby or habit in any form. I don't own or even drive a car.
As for IKEA I have a friend of 20 years or so who works at Z.O., with mixed feelings. My brother lives in Sweden and has some inside information about personnel treatment at HQ and local shops. Not good.