Spring is in the air, the days are lengthening and temperatures slowly going up. The time when most people are likely to head for the garden centre but the curb brought me a new addition for my garden: 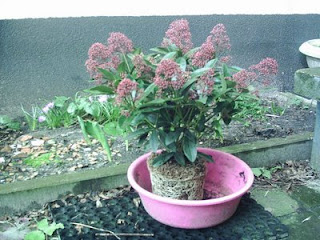 I don't know what it's called, but I've seen it in other gardens so I'm sure it's a good outdoor perennial. You can see it has been kept in a pot and ripped out of that before it was trashed, but other than that it was in good condition. The leaves were hanging a tad bit dried out, but after a night in the rain it thrived again. As usual it's beyond me why it has been abandoned...
Does anyone know if this is a plant that needs a lot of light? My feeling is it can do well in shadowy conditions. At least I hope so because I plan to cheer up one of the darker corners at the side of the staircase with it.
In the background you can already see some of my Oscar tulips pushing up! Though it wil still be a surprise if they will flower at least they are doing something. Hope to be able to update you on that soon too!
Posted by Le-Chat at Monday, March 02, 2009

Email ThisBlogThis!Share to TwitterShare to FacebookShare to Pinterest
Labels: Garden and Plants

Nice find, it would be even difficult to google the plant as you don't have a name for it. My suggestion is for you to look around your local plant shops to find out what it may be.

Problem is I just don't come near such shops, LOL. Never mind I'll just see what it does...

I think it's Joe Pye Weed- I googled a picture for it and it looks similar.

You will have to let us know how well the plant does. Hubby and I love to save discount plants from Walmart and Home Depot. They are thrown away, when all they need is a little love.

It looks like your plant could use an extra big pot to sreach out in because the roots look pretty cramped.

But I'm no expert. I just clip dead pieces off, water regularly, and love the little guys. They usually thrive with attention.

Translation for all who care: it's a shrub named skimmia japonica 'Rubella'. Easy to keep and thrives in shade and half shade.

So I can safely plant it near my shed.

Yes and I think you can be prettty sure: Look at the leaves and you'll
see that they are much thicker than those of the 'Joe Pye Weed'.
To get cherries from it however you have to combine a male- and female plant...

How is the little plant doing?